What do Football, Trains and Jungles have in common? Kota Bharu and Taman Negara, 19-22 June 2011

Following an incredibly violent boat journey back to the mainland and getting smacked squarely on the face with the lid of a cool box which got blown off in the wind, Barbara and I were on a bus heading north to Kota Bharu for a quick visit and to embark on the Jungle Railway to Tama Negara.  The weather was appalling, raining from the moment we arrived in the northern border city.  The only other thing that drew me to the town was the cultural centre which regularly performs shadow puppet shows.  Of course, when I looked at the programme I discovered that I had just missed the performance by one day.  Typically my luck, but there was another performance on which I wouldn’t mind seeing.  First of all, we needed food and were recommended an Indian restaurant called Meena Curry House the other side of the city.  My god it was worth the walk as it had absolutely wonderful food with excellent service.

An hour or so later we were making our way to the cultural centre to see the performance however half way there we were suddenly confronted with a crowd of people dressed with football shirts on and heavily decorated with flags, face paints and ribbons.  It turned out to be a friendly football match between Malaysia and Myanmar.  We decided that instead of going to the cultural centre we bought tickets to watch this international friendly.  The crowds were directed in through multiple gates and with no fixed seating, you could choose where you wanted to go.  The rain had thankfully stopped, but the pitch was waterlogged and the concrete steps that we were to sit on were completely soaked.  Most of the locals had thought ahead and brought plastic bags to sit on, but we just had to grit our teeth and get our butts wet.

The match was interesting to see, with the waterlogged pitch seeing the players slip and slide all over the place.  Fireworks and flares were being set off at the opposite side of the pitch to us and the smoke filled the stadium.  Looking around we were the only white people around and people stared and smiled as they passed us by.  Sometimes you think whether going to events such as this is a safe activity but I was in no way threatened and felt quite the opposite.  Malaysia won the match with two goals against none.  I couldn’t help but wonder who plays for Myanmar?  Are they all military personnel?  Surely a civilian in the oppressive state couldn’t possible play for their country.  As they lost, will they lose their lives for disgracing their country?  Who knows….

Kota Bharu is a completely Muslim town and does not have much to see other than a few museums which we didn’t go into.  There are only so many museums you can go to.  I needed to have a haircut so found a barbershop and proceeded to be told about my receding hairline.  The barber quizzed me about my life and what was causing me stress to cause this ‘no hair’ problem…  I never thought about it before but can now see it… Thanks for that Mr Barber!!

Our final night in the city saw us eating at the night market where you shared your space with several rats running around your feet.  The night market is supposed to be one of the best in Malaysia but I didn’t really see why.

It was 6.20am and following a restless night in the KB Backpackers due to noisy traffic outside we were in a taxi heading to the railway station where we were to get the Jungle Train through the jungle to Taman Negara.  We arrived at the station with plenty of time and bought a coffee and some snacks for the journey.  7.16 on the dot, the train’s engine fired into life and pulled slowly away from the station.

This was the first time I had been on a train since my journey from Hanoi to Sapa in northwest Vietnam and it felt like home.  Train travel is in my opinion the most enjoyable form of travel, you usually get a comfortable seat, the world passes you by through the window and you can get up and have a walk if you become restless.  This journey is aptly named the Jungle Railway as it weaves its way slowly through the jungle from the North Eastern frontier with Thailand and finishes in the capital city of Kuala Lumpur.  Barbara and I were travelling half way to Jerantut where we were going to catch a bus to centre of the Taman Negara national park that is nearly 4,500 square kilometres.  The vast jungle is said to be the oldest jungle in the world at 130 million years old and hasn’t been affected by any dramatic climate changes.  We were going to be staying in Kampung Kuala Tahan, a small village on the opposite side of the river to the park’s headquarters which meant that once we got off the train at Jerantut we had to get a connecting bus or something the rest of the way.

We arrived in Jerantut by lunchtime where we sat down to enjoy a meal in a little restaurant whilst we waited for our minibus to take us to Kampung Kuala Tahan. In some ways I wish I hadn’t eaten anything as the bus journey turned out to be quite exhilarating and akin to a rollercoaster ride without the safety.  The absolutely psychopathic driver made me consider whether we were going to make it to our destination.  I thought about quickly writing a will, but at this point in time I was in debt to the bank so it would have been a short one.  Even as we passed a minibus which had been recently been rolled several times and was resting on the side of the road I expected the driver to reconsider the lives he was carrying in the back of the rickety old minibus but there was no slowing him down from delivering us  down or anything.  As I’m writing this and you’re reading this, it’s obvious that I survived the journey.  Once we arrived in Kampung Kuala Tahan safely, we found a guesthouse and headed down to the river bank where a couple of restaurants sit, or rather stand above the water, to have a meal in celebration of our fragile lives. 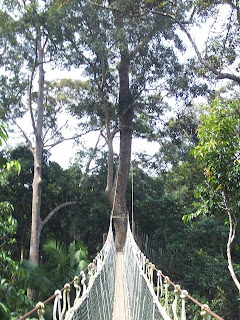 One of the biggest treats of the area is the canopy walk which stretches out high through the trees.  It is actually marked as the highest canopy walk in the world.  Some of the sections looked as though somebody had been down the local B & Q bought some ladders, wooden board and wrapped it up in some rope netting in the trees.  It was an awesome walk through the trees though which provided some fantastic views of the jungle from above.

After finishing the canopy walk we rushed back through the jungle to the park headquarters and boarded a boat to take us back to the other side of the river where we were going rapid shooting.  Rapid shooting is where you go on a motorised boat up stream through the rapids.  It was fun and got incredibly wet, which was helped by the two boats engaging in a fierce water fight.  Our first destination was an Orang Asli village, Orang Asli are the native people of this area who still live off the land and out of the modern society.  Once we climbed up the embankment, we were greeted by the men of the settlement.  The women hid in a tent away from us.  I wasn’t sure whether they were scared of us, embarrassed or were ordered to stay out of sight.  The men gave us another lesson in how to use a blow pipe and then took us through how to make a fire.  The people were incredibly friendly and welcoming.  On the way back to Kampung Kuala Tahan, we stopped off for a swim and have some fun on a Tarzan swing.  The river is full of those tiny little fish that munch the dead skin off you which I’m not so keen on.  The journey back to town was wonderful as I sat back and watched the jungle go past either side without hindrance from man.
It was time for us to leave and as I grabbed my shoes to place them in my bag I grabbed the backs of each and banged the, together to get as much dirt off them as possible.  After a couple of bangs, something fell onto my left hand and in shock I threw the shoe and frog across the path.  Poor little frog, just found a nice place to sleep and I gave it one of the biggest headaches in history.  There is a boat trip which takes you from Kuala Tahan to Jerrantut, but this is a long journey and we were advised that as we already did a boat trip through the jungle that it’s a bit like Scooby Doo and repeats itself over and over.  Instead, we got the morning local bus which cost 7RM to our next destination, Kuala Lumpur.