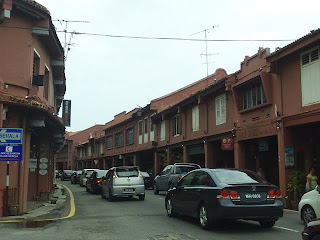 The late afternoon heat was relenting as our bus to Malacca opened its doors and invited us in.  Jackpot, I thought to myself as I saw wide reclining chairs.  I excitedly found my seat and got comfortable for the relatively short journey ahead.  As the bus was moving out through the suburbs of Kuala Lumpur my mind was running with the thought that in only a few days I would be on a plane flying towards Perth.  Everytime I think of the flight, I get a little anxious and remorseful as I feel my journey by land and sea failed and I missed out Indonesia.  I did not have any money to continue on my journey through Indonesia as I was already in debt on my credit card, so I had no choice but to give in and fly to Perth where I would hopefully get a job and pay off my debts.

We arrived in Malacca just before sunset.  I retrieved my handwritten notes from my bag which I had copied from the Old Town Guesthouse website.  The directions told us to get the number 97 from stand 13.  Unfortunately when we asked the bus driver at stand 13 whether he was going anywhere nearby, he said no and told us to go to another stand who in turn told us no and proposed a completely different stand.  A local lady watched us running from stand to stand in utter confusion and offered to help us find the right bus.  She asked a few drivers and also got no conclusive answers so took me to the bus station office where they discussed and finally gave us an answer. 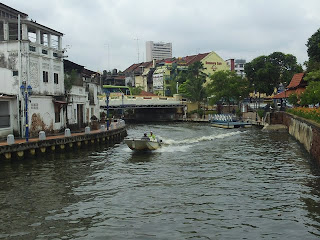 It was dark by the time we reached the guesthouse.  We entered through the doorway on street level and climbed the stairs that led to the guesthouse which was spread out on the first level above an Indian restaurant and a Malaysian café.  The gueshouse was run by a Frenchman and his wife who were very welcoming.  They showed us to our room which was a simple twin with a tall window and importantly two fans.  We were lucky that the night market was on in China town so we took a walk, ate some delicious food at a small Chinese café and wondered aimlessly through the market browsing at the vast merchandise on sale.  The highlight to the market was the karaoke in the centre where people took turns on the big stage singing their songs.

Malacca was an important Portuguese trading town whose port linked the Malay Peninsula with India, Indonesia, Thailand and China.  Due to its past, Malacca has an extremely diverse culture and architecture which is apparent through every turn.  Churches and temples stand side by side and the area around the 18th century Christ Church is magnificent and truly a remnant of Portuguese architecture and colours.  Upon a hill overlooking Christ Church and the rest of Malacca are the enchanting ruins of the St Paul’s, which was originally built in the early 16th century.  This poor church has gone from small beginnings, enlargement whilst the Dutch were around and finally being used as an armoury for the British army.  The views from above were fantastic and stretched all the way to the coast where you can clearly see the container ships steaming through the Straits of Malacca which were once notorious for pirates. 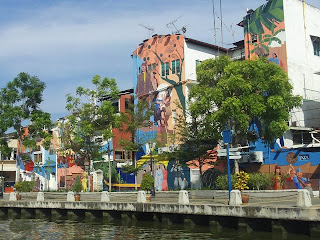 Following our walk around town and up the hill to St Pauls, we decided to take the weight off our feet and enjoy a boat tour down the river through the heart of Malacca.  It was pleasant but not relaxing or informative at all as we were surrounded by an extremely large Indian tour group who decided they needed to converse as loud as possible.  I’m sure they were in a competition who could make the most annoying noises at the loudest possible volume which completely outdone the recorded tour guide.  Even though we couldn’t hear the information being provided, we could see that there wasn’t actually much of interest to see on the way apart from the extraordinary painted building stretching up one side of the river and a rather depressing looking fairground. 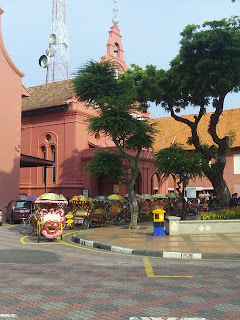 This was my last day in Malaysia and my onward travel was yet to be decided.  I knew that I was going to head to Singapore but how I was getting there was the issue.  I really wanted to take the train as I love trains and it would have been nice to finish my overland journey off with a train journey.  Not only that, but it would have be a historic journey as the Malaysian and Singaporean rail networks have decided to cease the journey from Malaysia into the central Singapore Railway Station and stop trains at Woodlands station at the Northern frontier.  They hope that this change will speed up the immigration process and from Woodlands you can hop on the MTR which will take you anywhere in Singapore.  The last journey into the centre was planned to take place on 1 July 2012.  Getting the train from Malacca isn’t that simple as you have to get a bus to Tampin which is 38km north of the city.  It was either the train or the bus.  My mind was torn between the two but was eventually settled when I looked inside my wallet and saw only enough to get the bus, no more. 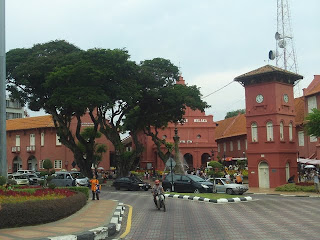 The day had come to move on after a fantastic few weeks travelling through beautiful Malaysia, seeing some pretty awesome places and meeting some wonderful people.  It was also time to say goodbye to my Malaysian travel partner, Barbara, whom I had met on the ferry between the islands of Langkawi and Penang and had travelled with throughout Malaysia.  She had been a fantastic travel partner but it was time to go solo once again as she had a couple more months of travelling South East Asia and was heading back up north to Ipoh.  Our last journey together was the bus journey to the bus station.  As we arrived at the station we headed to the relevant ticket offices which were actually next to each other and were lucky enough that our busses were both leaving within minutes.  Our goodbye was quick as we both had to rush to catch our onward buses.

I was on my own again.  Travelling is a fantastic experience however, travelling alone means you have to often say goodbye to people whom you have become good friends with.  I knew that this was the last time I was going to say goodbye to anyone as I was only spending one and a half days in Singapore which meant it was unlikely for me to make any decent friends.  I sat in a seat towards the back of the bus with my bag behind me, fished out my MP3 player, reclined my seat and relaxed whilst watching Malaysia fade away behind me.
Posted by Andy Adam at 00:00