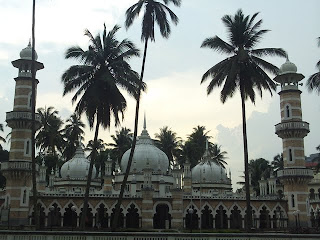 The brakes screeched and my body jolted slightly off the chair as the bus stopped in a rather unwelcoming bus station on the outskirts of Kuala Lumpur.  It was a strange feeling to be in the midst of a big city again as the last big metropolis I was in was Bangkok.  Kuala Lumpur felt different to the other Asian capitals I had been to, it was modern, westernised and with it a mixture of ethnicities.  Mark, my friend from Norwich whom I had worked with on the Maddermarket stage in the production of Arsenic and Old Lace during August 2010 had very kindly put me in contact with his brother Darren who lives in Kuala Lumpur and hand generously offered to accommodate Barbara and I during our time in the city.

We got off the bus not knowing where we were or where we were going.  Our only plan was to head into the centre where we could find an internet café to call Darren who would be able to give us directions.  The bus station was conveniently placed beside metro stop where we found a map of the transport network.  The only problem is we had no idea where we were but a passing man saw us studying the map with confusing and helped us out telling us where we were and where we should go.  So we headed for Little India.

The train pulled into Little India’s metro station and we walked down onto street level where we found a Burger King with free wi-fi.  Excellent.  In we went and onto the internet we go.  I open up Skype, which has been invaluable during my trip, and dial Darren’s number.  What the hell, we had to choose the precise time they decided to put up a flat screen television upon the wall.  The noise of the drills drowned out Darren’s directions and coupled with the bad connection made it very difficult to hear.  We managed to get his address and directions to get there.  We had to get the metro to KLCC and grab a taxi to his house.

The taxi driver was an idiot, we gave him the address and he continuously enquired where it was and how he should get there.  We had to keep reminding him that we didn’t know, which you should never say to a taxi driver I know, but what else can you say if you have no idea where he should be going.  We eventually pulled up outside Daren’s house where we were greeted by his wife, Gina and their young child, Dana.  They had also just recently been blessed with their second child, Tristan.  As soon as we crossed the threshold their generosity and hospitality was astonishing.  It was hard to come to terms with though, after months being on the road and stopping in crappy to mediocre hostels/guesthouses it was strange being in a family home with a comfortable bed and home cooked meals.

Waking up in a comfortable bed is unbelievable and to follow that with a beautiful breakfast laid out for us was awesome and set us up nicely for the day.  No visit to Kuala Lumpur is complete without a visit to the Petronas Towers and a walk along the skybridge that links the two towers on the 41st floor.  To be able to visit the towers, you must get there early and secure one of the limited tickets available for the day.  Barbara and I got there a little late, but with some convincing the lady on the ticket desk found two tickets for the last trip of the day.
KLCC, Kuala Lumpur City Centre sits below and around the Petronas Towers and hosts numerous high end shops and more importantly a concert hall where we were lucky enough to attend an open concert of the Malaysian Symphony Orchestra.  This was one of my most treasured highlights of my visit to Kuala Lumpur as it’s one thing watching and listening to a concert but it’s amazing to watch the magic being created and the conductor fine tuning ever little tone, rhythm and dynamic.  We couldn’t have gone to a real concert anyway as we didn’t have the right attire to adhere to the strict dress code.  The only issue was that my eyes were feeling quite heavy so during the interval, I headed to the shop outside and bought a bottle of Coca Cola, a Mars Bar and some flavoured Mentos which seemed to keep my eyes wide open.

There were a few hours following the concert until we were allowed up the towers, so we went for a wonder around the city from Little India, Merdeka Square to Chinatown.  Merdeka square is at the centre of Kuala Lumpur and Malaysia as this is where on August 31 1957, Malaysia first celebrated their independence from British colonialism by raising the Malaysian flag up the, apparently, tallest freestanding flagpole in the world which stands at 100 metres tall.  The walk around this section of the city proved my initial feeling of multiculturalism, with architectural influences from around the world merging to form something beautiful.

The 451 metre high Petronas Towers are at the epicentre of the Malaysia, an icon of the country’s economic success and houses Petronas, the nation’s oil and gas company.  Before heading up the lifts you are invited into a room where there is a lot of background information on the towers, how they were built, the architect’s vision and general information on the future for the towers and Kuala Lumpur.  It was very interesting to see how they designed the building and how the architect and the engineers built the skybridge.  Interestingly, the skybridge couldn’t be firmly fixed in place due to natural movement of the two towers.  “Blue tickets.”  A lady announced and requested that we check our bags and coats into the cloakroom and then congregate by the lifts for our vertical journey up 170 metres.  The skybridge gave some impressive views of the city however, I’m sure they would have been even more stunning should it be a clear day but as it’s wet season it tends to reliably rain at 4pm each and every day. 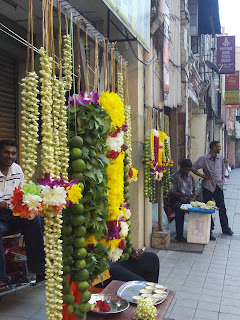 Later that evening we went for a meal with Daren, Gina, the kids and their maid at a local restaurant.  The restaurant seemed to pride itself on having no frills but was highly thought of by the looks of the expensive cars in the car park.  It was a delicious way to end our short time in Kuala Lumpur and to say goodbye to such fantastic hosts.  Daren and Gina are an excellent example of the generosity of human nature and I couldn’t thank them enough for putting us up for a couple of nights.  Such a wonderful family.

Although we didn’t spend a long time in Kuala Lumpur, I feel that we managed to get a feel of the city and see most of what there is to see.  It was time to move on to our next destination, Malacca, and my final stop within Malaysia.  The bus station was the other side of the city to where we were and Daren very kindly drove us there.
Posted by Andy Adam at 05:12