SLAM, my head hit the side window of the minibus for the fifteenth time as the maniac of a driver stormed around the winding mountainous roads at an obscene speed.  Thankfully the roads were superbly sealed unlike their South East Asian neighbours, but this does give them more of an excuse to thump their right foot hard upon the accelerator.  We’re heading for the Perhentian Islands just off the east coast.  Our bus journey was actually very comfortable despite the speed, although the comfort ended, for me anyway as half way down the road we had to swap minibuses and the ‘seat’ provided to me sat at a 20 degree angle and the back did not lock in place.  So the remaining three hours was not comfortable at all.

Above our heads the clouds encroached, darkened and within five minutes rain began to fall, hitting hard against the roof of the minibus.  The rain was relentless and roads began mimicking rivers with large sections of road becoming submerged under water.  Lightning electrocuted the skies and were dramatically followed by excruciatingly loud cracks of thunder.  As we approached Kuala Besut, the rain had stopped and we managed to board the open top boat in the dry.  The bags were thrown aboard and the driver steamed away from the jetty only to be stopped by a French man who had stupidly left his iPhone behind.  I would have personally taken great delight in telling him it’s his own fault, but the skipper was a friendly chat and turned around.  With the French man and his iPhone back aboard, we tried to depart again only to stop a further 300 metres out.  The driver and his assistant were chatting, obviously discussing something important.  Turned out that one of the engines had failed and we returned back to the jetty once again to change boats.

Looking behind us we could see the storm cloud catching up.  We were now in open water and the waves were erratic bouncing the boat’s hull high above the water.  The clouds were getting thicker, darker and people all around had a rather concerned look on their faces.  These boats were amazing service as you tell them where you were staying and they drop you off right outside.  We stopped a couple of times on the near side of the island before heading round the other side to D’Lagoon, where Barbara and I were staying.  We approached the bay as it began to spit with rain, just in time.  The boat slowed and came to a stop.  On shore, a small man ran from the restaurant area, climbed into a boat and navigated his way to collect us.  The small man actually turned out to be a child, which was a slight shock.  He grabbed our bags, we transferred vessels and headed to shore just as the rain began pelting down again.

D’Lagoon was an isolated resort, an hour’s hike through the jungle from the main section of guesthouses on the island.  The beach was made from sand, shingle and shell led down into the clear blue water full of coral reefs.  As it was raining, we sat in the restaurant which was reasonably priced watching the storm move in as darkness fell.  Thunder and lightning lit up the sky for the most part of the evening.  That’s where we met Kate, an English newly qualified doctor on a break before commencing practicing.  We spent the evening eating and as the island is completely T-Total, drinking fruit juices.

The next morning we were sitting in the restaurant eating breakfast when the daily snorkelling trip was leaving.  Suddenly, even before we knew it, Barbara, Kate and I were on the boat heading out into the open water with snorkels in our hands.  What a fantastic surprise trip, such beautiful and colourful underwater life swimming around coral reef.  On the boat with us was Raja, an Indian from Mumbai who had a slight American accent.  The trip was entertaining as we shared stories and how he was going to set up a motorcycle touring business in India following a fantastic trip he had made up in Northern India.  The snorkelling trip had us leaping overboard following turtles, sharks and Nemo like clown fish.  The day unfortunately finished off with a slightly burnt back despite the overcast skies above….  Oops… must have forgotten a section of sun screen.

That night we met another addition, Sofie, a 17 year old girl from the Netherlands travelling by herself.  Raja took a liking to her and pulled out his best lines to woo her whilst the D’Lagoon staff serenaded us with traditional Music and singing.  We joined the circle with my new friend Saiful and his children whom we had met earlier in the day on the beach.  Saiful was a public servant living in Kuala Lumpur and was on a holiday with his wife and two children.   Once in the circle, we were invited to sing a song each with them playing the accompanying music.  I sang a rather poor version of Hotel California which went well until I forgot all the lyrics. 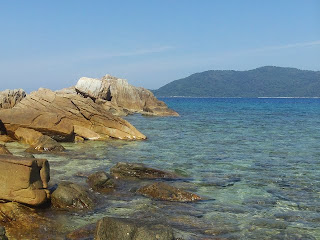 We all made sure that we got up early the following day so we could take a small walk to the neighbouring bay to see the early morning sharks coming to the shore.  Then we spent most of the day snorkelling around D’Lagoon’s coral reefs watching which was amazing.  The staff at D’Lagoon had also rigged a zip line which goes right across the beach.  They pride them on supposedly having Malaysia’s longest zip line, but I’m not sure on the credibility with that.  Whilst sitting on the beach at the end of the day a boat from the mainland pulled up and on board were no other than Nikolai, Reut and Rudie.  The rest of the evening was spent having a drink, as a small box of beer was delivered to the island and playing a few games.  The staff sang and played again with Reut and I doing a better rendition of Let it Be which was, hopefully well received.

The end to our last evening was spent on the beach playing guitar with Rudie, the guys from the hotel, Sofie and a Spanish guy.  I hadn’t played guitar for such a long while and it was really good fun and a fantastic end to my stay in the Perhentians.  D’Lagoon was a fantastic place to stay, with absolutely fantastic staff that were incredibly welcoming and made sure we got to see the best of the island.  Unfortunately this also marked the last evening we were spending with Reut, Nikolai, Rudie and Sofie too as we wouldn't see them again during our trip through Malaysia.  Excellent people who traversed Malaysia in our shadow and meeting every now and again.