Esperance has some of the world’s most postcard perfect beaches.  When the sun shines that is.  The rain was falling steadily over the five of us (including Sergeant Spliff and Walter) as we left the camp site at Cape Le Grand and made our way back to Esperance.  I haven’t been this disappointed with the weather since  Matt and I were in Guilin, China and we were at the view point that overlook the rice terraces that has such fantastic views in the sunshine, but we couldn’t see any further than two feet in front of us because of the cloud cover.  The guide held a postcard up in jest, saying this is what you could have seen.  Esperance in the rain is a little like Lowestoft.  The rain wasn’t going anywhere for three or more days so we decided to move on and hopefully out of the bad weather.

We stopped in Esperance to buy some essentials for the road as we didn’t know when we would next come across a decent shop.  Tanwyn had also made the rash decision to have his hair shaved short to relieve the need to style it every morning.  Whilst Tanwyn was changing his appearance, Mike and I were in the library on the internet and drinking their complimentary tea and coffee.  Before we left Esperance, we visited the Department of Transportation office to ask whether the shortcut to the Eyre Highway was accessible by our car.  The short answer was no, it was a rough terrain and even if we had a four wheel drive would take us the same if not more time than the smoother longer way round.  With this in mind, our food bags full and Walter’s full tank of fuel, we headed North to Norseman.

The rain stopped every now and again forcing us to wonder whether we made the right decision to leave Esperance.  The further we got from Esperance, the biggest pang of disappointment bubbled away in my stomach.  From the gorgeous weather we had in Margaret River to the dull grey skies over this supposed paradise.  Mike had introduced us to Ricky Gervais’ podcasts which lightened our mood as we laughed all the way to Norseman.  Norseman, halfway between Esperance and Kalgoorlie, is the final resort before heading onto the Eyre Highway that stretches 1,675 km (1,041 mi) across the South coast to Port Augusta in South Australia.  Before driving on a sparsely populated road like this, it’s important to fill up with as much fuel as possible.  We pulled over into a small petrol station and filled Walter up to the brim.  The wind was blowing hard and forced the rain almost horizontally as we dashed into the shelter of the shop.  A friendly middle aged man greeted us and commented on our Union flag that was patriotically erected on the car.  He turned out to be an ex-patriot himself and flourished with the opportunity to talk with us.  We felt bad, but we needed to get back on the road as the light was falling fast and we needed to make it to Fraser Range and set up our tents before dark.

We circumnavigated the last roundabout we’d see for thousands of kilometres and a signpost welcomed us to The Eyre Highway.  This was it.  It was a strange and uplifting feeling.  The road leading to a future full of adventure and uncertainty.  The next town, Eucla, is over 700km (440mi) away.  Between Norseman and Eucla there are only roadhouses that provides water and fuel and are apparently only 86 residents.

Up until now we hadn’t got lost once, but thanks to a misrepresentation on our map we were confused as to where Fraser Range, our first stop, was.  The map and the description were confusing but we forced ourselves onwards and thankfully found this gem of a campsite.  It was a typical outback range, animals, machinery and acres upon acres of land.  The man who greeted us was a jovial fella who welcomed us with open arms and warned us that if we hear gunshots, it would be him shooting rabbits.  That was good to know!  With that warning, the race to erect our mobile homes before the sun set had begun.  Not only was the sun setting, the clouds above were filling dramatically and changing to a deeper grey.  We were in for a night of trouble.

The next morning we reflected on the previous night.  The rain hit hard and the wind forced our tents to lean forcing the pegs from the hard red ground.  Drips of water seeped through any crevasse it could.  These $15 tents from K-Mart weren’t built for extreme weather like this.  Let’s hope the weather improves soon.  Luckily the range had a cosy kitchen area where we watched a film and drank a couple of beers before.  Outside spiders clung to the walls and massive Red Backs hid in corners and under chairs that put all the previous ones I’d seen in Perth to shame.  Top Tip, always look under a chair or table before lifting it off the ground.  The sleep that night had been erratic as the storm battered the sides of the tent like a drum.  We were happy to get back in the car and begin driving again. The first roadhouse on the Eyre Highway was Balladonia.  A place that became famous in 1979 when NASA’s Skylab re-entered the Earth’s atmosphere and littered debris across the South West.  Esperance council actually fined NASA $400 for littering and Jimmy Carter, the then President of the United States, was forced to offer an apology.  Balladonia’s roadhouse has a museum which tells the story of the Skylab incident and other interesting things about the history of the roadhouse.  It also has a car coming through the wall for some strange reason.  We filled up with fuel, grabbed a coffee, a bite to eat and hit the road again.  Balladonia marks the beginning of the straightest road in Australia known as the 90 mile straight.  I have driven along some straight roads in my life but this was ridiculous.  The Acle Straight in Norfolk seems like a 100 metre sprint compared to this.   We broke the straight up with a filming session… 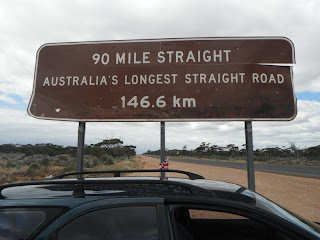 Following our second night’s stay in a rest stop in Madura, we headed onto Eucla and the border town between South Australia and Western Australia.  Each place prides itself on their distance charts and here the distances relate to cities around the world.  We were 1,462km from Perth and 17,517km from London.  Before leaving Western Australia, we drove up to a vantage point that looks out across the Nullarbor Plain.  Fantastic view and a good taste of the terrain we were going to drive through shortly.  This also gave us some more opportunity to film our latest music video. 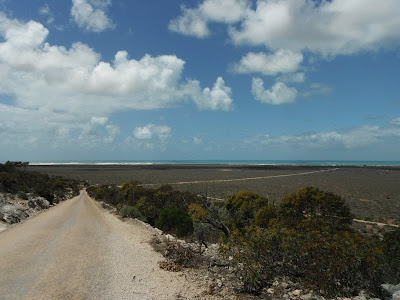 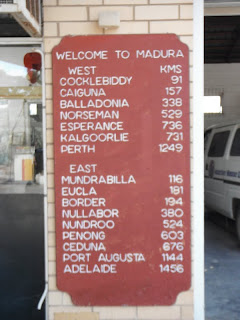 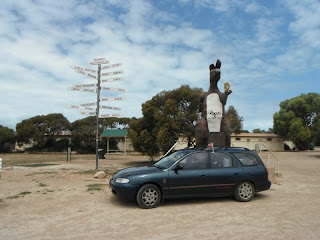