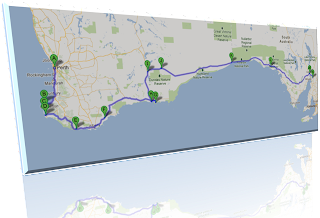 The act of reminiscing is inevitable when you are confronted with certain experiences that force you to depress the stop button of your life for a moment of recollection and wonder.  There is no telling when these moments will occur.  It may be a familiar taste, a horrid smell, the sound of music or an intense view.  Your senses become overwhelmed and you slowly fill your lungs deep with the surrounding air as your head tilts skywards, eyes half close followed by a slow and satisfying exhalation.  Reminiscing can either be of happy memories, of people close to you or perhaps sad memories.  Whatever the nature of your thoughts, a moment of recollection is usually accompanied by anticipation of the future.

The sound of waves crashing against the wall of Australia mixes my thoughts and brings me back to lucidness.  A smile grows on my face as I open my eyes to reveal a blue sky littered with fluffy white clouds.  Deep below I see water exploding up the cliff face as it slowly eating away at the coastline with such relentless force.  My attention is brought to the horizon.  The sixty metre high cliffs of The Great Australian Bight run of into the distance both eastward and westward.  The enormous cliffs clearly define the country in a map like clarity.

A week has passed by since we left Perth on that sweltering Sunday afternoon.  Since then we have travelled almost 2,500km and earlier we crossed the state border into South Australia.  We have been unfortunate the weather ever since we left Albany a few days ago.  Each morning the sun shone brightly providing us with hope that things were going to turn for the better and no matter how fast we pushed Walter, we couldn’t get away from the raincloud.  The nights were becoming painfully uncomfortable and cold.  Before we left home we thought there wouldn’t be any need to buy expensive tents as the weather would be dry, how ignorant of us to think there wouldn’t be rain in one of the driest landscapes on Earth!  The tents leaked temporarily were battered by the wind that plagued us late in the evening.  On another more personal note, I was now beginning to wear my underwear for the second time round.

Passing through the border marked a milestone of our adventure.  We were no longer in Western Australia and had arrived in the Nullarbor which is quite aptly named in Latin meaning ‘no trees’.  For as far as the eye can see, a vast and flat treeless plain escaped into the horizon on all sides.  The road hugged the Australian Bight at many points along the route giving excellent views of the Southern Ocean.  Walter steadily moved along the road at just over 100km/h which seemed to sit around 2,000RPM nicely.  Cars were sparsely seen along the road, there were lots of road trains spitting up stones as they passed, one stone nicely making a crack in our windscreen.  A white blob appeared on the road in the distance and it was getting bigger as we got closer.  It was a car moving incredibly slowly on our side of the road.  It was dangerously slow in my opinion, if a road train came steaming up behind you it would just wipe you off the road before slowing down.  We approached from behind and made our move to overtake the slow mover only to discover another vehicle in front.  It was a bright pink scooter, no larger than 90cc chugging along slowly.  What a crazy thought, travelling along this road in that!  A few miles down the road we met the two Perth guys in a roadhouse.  On closer inspection of the scooter, they had made some much required amendments including a new cooling system.  The guys were travelling from Perth to Melbourne for charity on Big Red’s Pink Ride and had already had quite an experience.  Matthew, the bike rider told us how he was plagued by the stones being flung up by road trains causing painful bruises.  We wished them well and got back on the road.

We had one further night on the edge of the Nullarbor.  The rain forced us to abandon the tents and shack up in the car for an excruciating night that was uncomfortable, stuffy, and claustrophobic and I’m not sure whether I got any decent sleep all night.  It did mean, however, that we got back on the road early and was able to make a huge distance the next day.  To fuel the journey, we stopped in Penong for an egg and bacon sarnie and several cups of coffee.  Penong has a population of just over 200 and was the most populated town we had been in since leaving Norseman on the other side of the Nullarbor.

Vegetation and farms were becoming a familiar sight the further we moved away from the Nullarbor and into the grain belt that extends across the top of the Eyre peninsular in South Australia.  Towns mimicking one another sprouted up more and more often that created a Scooby Doo backdrop repeating itself as we drove.

We reached a small town called Minnipa which was unsurprisingly indifferent to the rest but all felt it was time for a rest.  As we pulled off the main highway and crossed the railway line that runs alongside the road we found a sign directing us to Pildappa Rock.  We had absolutely no idea what this was but it was on a brown tourist road sign so we decided to go and explore.  The rock was a 15 kilometre drive north of the town along a road that progressively deteriorated the further we went.  Formed around 1,500 million years ago, the Pildappa is an inselberg rising up like a golden nugget.  One side of the rock has weathered into a wave that stands 10 metres high.  The only other people we saw around were in a campervan that left just as we entered.  We were alone to explore the rock.  We found our starting point and climbed the rock.  Some parts of the rock were quite steep and were completely inaccessible.  Once on top we, we were attacked by the wind which blew hard against us.  The view from the top was excellent and gave us a good overview of the surrounding countryside.  At the bottom, we cooked up some noodles and got back on the road.

That day we drove a long way across the top of the Eyre Peninsular, through Port Augusta and finally finding our resting stop in Mount Remarkable National Park.
Posted by Andy Adam at 19:52