Awesome Australian Adventure - Day 5, 'Walter, we have a problem' 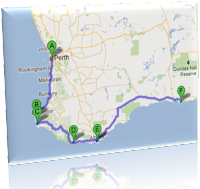 Things done: Beer, wine and Cheese tasting, Stingray spotting, swimming in reservoir, climbing bicentennial tree (me not all the way… screw that…), camping by the beach in Cape Riche.

Tick……tick……tick….tick…tick..tick.tick-a-tick-a-tick-a-tick-a-tick-a-tick-a-tick….  “There’s that noise again” I said to the guys as we pulled out onto the road heading from Esperance to Cape Le Grand.  I turned off the radio and opened the window.  The ticking continued and the tempo matched the engine revs.  What the hell was it!?  We pulled over and opened up the bonnet.  With the engine still running, we listened in the engine bay but couldn’t hear anything.  I carefully slipped my hand around the back to find the throttle and slowly increased the revs.  The ticking began again.  It was coming from the left hand side.  Our thoughts immediately went to the worst case scenario.  The cambelt.  We’d had it changed before we left and wondered whether a bolt had come loose.  We looked behind us and in front, we were half way between Esperance and Cape Le Grand.  Should we continue or should we go back to Esperance.  We continued, slowly edging Walter along the road to the campsite.
We stopped at the camp entrance and looked on in anxious despair as the road wound into the distance.  The road was dead quiet and travelled through short bushes.  The view was amazing.  Such a beautiful landscape but our thoughts were submerged in doubt over Walter’s future.  Flashbacks ran through our minds of people in Perth telling us that we wouldn’t make it out of the city, let alone across the country.  Well, he had taken us through tastes and stingrays of Margaret River, the forests of Walpole, Albany to here.  Could this be it?  I urge myself to stop being so negative and we decided to sleep on it and take Walter back to Esperance to see a mechanic the following day.  The sunset over Cape Le Grand was stunning.  We sat on the beach with cheese and beer and tried to forget about the impending problems.

The clouds loomed above us as we looked under Walter’s hood the following morning.  I was fearing this moment all night and hoped that the tick would have just disappeared.  It hadn’t.  I scouted around the engine bay in an attempt to find something that could be fixable.  My hand brushed the alarm/immobiliser.  The noise stopped.  I grabbed the throttle and tugged on it with my right index finger whilst holding the alarm.  No ticking.  I let go of the alarm and the ticking had started again.  Well, there we have it.  That was our problem.  A loose bolt on the alarm caused it to vibrate against the body work as the revs increased.  Mike retrieved his mini toolkit and tightened the problematic bolt.  With that sorted and smile on our face, we had to decide what we were going to do.  Esperance is a place for the sun, but the rain had started and the forecast wasn’t good for the next few days so we made the decision to move on and make our way to the Nullarbor and the road out of Western Australia.