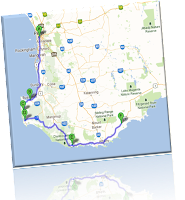 Things done: Beer, wine and Cheese tasting, Stingray spotting, swimming in reservoir, climbing bicentennial tree (me not all the way… screw that…), camping by the beach in Cape Riche.

It’s been four days since we left our house in Beaufort Street and we have never felt so liberated in our lives.  We were well and truly on the road and there’s no better to start a road trip than the South West.  The region is one of the most beautiful places I’ve been to and I couldn’t wait to show Mike and Tanwyn around.  The sun was shining strongly through my tent raising the temperature way above acceptable forcing me to get up and get into some fresh air.  Ouch, my back cracked and a pain shot through my neck.  My roll mat was near useless making me think I may as well sleep directly on the ground.  Perhaps this wasn’t a good feeling after just one night to experience, I wonder what it’s going to be like after a few weeks in a tent.  Maybe I’ll get used to it.   I accepted it and moved on by packing up my tent and grabbing some breakfast.

After leaving the tent, I looked around and noticed that our feeling of being all alone was unfounded and blatantly wrong as there were several people camped extremely close to us on either side.  We wondered how loud we were and what did we talk about.  Whatever we said, I think we got away with it.  We soon packed up and hit the road to discover Margaret River, or Margs as it’s affectionately referred to by locals.  Margaret River is home to some fantastic vineyards, breweries and stunning natural beauties.

First on our list was a drive through the beautiful Baranup Forest to Hamlin Bay where we went for a dip in the turquoise ocean and saw some stingrays.  The day was a wonderful summer day, no cloud in sight and with our new found freedom, I felt on top of the world in a wonderful place with a couple of mates and thousands of miles ahead of us.  Who knows what was in store for us.  Tanwyn went on his usual expedition out into the depths of the ocean, somewhere I wouldn’t go off the coast of WA.  In the previous few months there had been several fatalities from shark attacks, one not too far away.  Tanwyn arrived back in one piece and we got on our merry way towards Margaret River for a bite to eat at Settlers Tavern which is a popular night spot for tourists and those angry backpackers that are working on the nearby vineyards.

After lunch, it was time to enjoy the tastes of Margaret River, namely the cheese factory, chocolate factory, Bushshack Brewery and finishing the day off at an ice creamery.  This region holds so many different wineries and breweries, it would take you a lot longer than one day to cover them all.  The Bushshack Brewery is enough though.  As the name suggests, it’s not much more than a shack with a bar, tables and some bar sports such as a round pool table and table football.  The brewery offer a huge variety of different tasting beer from dark stout to passion fruit flavoured lager.  We got a variety and enjoyed them in the afternoon sun before making our way to our next evening spot, Karridale, which was South East of Margaret River on the way to Denmark and Walpole.

As we pulled into the campsite we were immediately aware that the sun didn’t have much more life left in it as the trees were casting long shadows across the ground which meant if we wanted to be comfortably set up for the night ahead, we’d have to get moving fast.  It didn’t take us long to set up camp and managed to do it in sunlight.  We spent the night watching a movie and chilling out.

Over the next couple of days we drove to Walpole where we camped in the middle of the forest, then to Albany where we camped by the beach in a place called Cape Riche.  Getting to Cape Riche was our first experience of the true red dust of Western Australian roads.  It was around 20 kilometres of gravel from the main tarmacked route 1 to our campsite.  Walter rattled as we bumped along the rough surface and plumes of red dust were left in our wake.  This was a perfect opportunity for Tanwyn to have his second driving lesson.  He took the wheel and drove the 20km of dust and gravel!

Up above, the once blue sky was marred by menacing clouds.  Spits of rain began to fall.  We can only hope the this will pass…  The next day, we’ll be heading to Esperance.