The Tiger, the Big Cats.  It's not often that you are able to see a Tiger and even rarer to be able meet one and stroke one.  The tigers are now unfortunately endangered and not many remain in the wild due to the spread of humans, hunting etc.  Many are totally against keeping these magnificent creatures in captivity and I agree with them to a certain extent, however, places like Tiger Kingdom who are completely dedicated to raising and maintaining the tiger's health is not a concern for me.  I heard plenty of rumours before arriving at the Kingdom that the animals were drugged so they remained docile.  I do not believe this to be the case and I am firmly of the opinion that these animals were well looked after by their keepers. 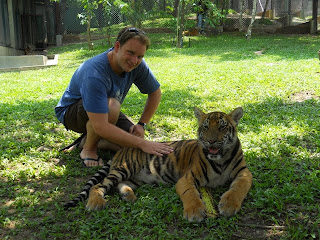 Getting up close and personal with a tiger is a great experience, although they are welcoming and not bothered by you patting and stoking them, you know that if they did suddenly have enough, they could turn around and tear you hand off with a swift snap of their jaw.  There are certain rules that you must follow when your within the tiger's compound and should you not follow these, you may be dinner! 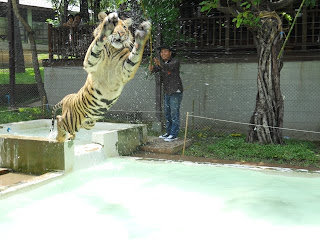 Seeing the fully grown adult tigers playing with the keepers in one of the pens was amazing as they acted like their smaller feline counterparts in every way.  Chasing string, trying to claw things out of the air with their massive paws and jumping into the pool although with a much much larger splash.  Tom paid the extra money to go in with the baby tigers, I wish I did this too but I was being extremely tight on my budget.  If you do find yourself here, definitely go in with the babies and the big cats.  Just seeing them play around was astonishing and extremely, I hate to use this word, cute.

We finished off the day with a few beers whilst watching Man Utd unfortunately win the Premier League which made my Mancunian travel companions extremely happy.  We were the only people in this sports bar and the owner invited us to eat with them as they were celebrating someone's birthday.  They had cooked up lots of little dishes and meat on the barbecue.  Although we had already bought a meal from them, it was very welcome to have some more food.  Things always taste better when they're free and given to you by generous locals. 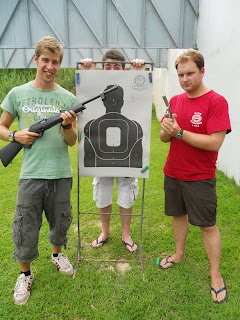 Back in Ho Chi Minh City, we had wanted to 'blow some shit up', to put it frankly but hadn't managed to as it was actually more expensive than what we had imagined.  The same went with Cambodia, although after visiting the Killing Fields, picking up a gun is not exactly the first thing you want to do.  As this was our last day together we had planned to head to a local museum, however this was closed, so we continued on our contingency plan and made our way to the shooting range where Nicky and I grabbed a couple of guns and shot at some targets for a while.  Unfortunately time goes far too quickly and so did the bullets.  I was actually quite surprised with my accuracy and managed to get most of the shots on target.

It was our last night together.  I had originally met Tom and Nicky way back in Saigon, early April and had travelled with them, bar a couple of side trips through Cambodia, Laos and into Thailand.  We had had fun, experienced anger and frustration and had many many laughs and it will be strange not to have them around anymore.  They had to catch their flight to Darwin from Singapore on 28 May and thus did not have long to get down there.  I, on the other hand hadn't made any firm travel arrangements just yet so could continue ambling along leisurely.  People ask, what's it like to travel alone?  Don't you get lonely?  The answer is simple, you're never alone for long.  You meet people everywhere, sometimes the strangest places and stay with them for a while.  Up until now, I have only been truly alone for no longer than one consecutive week. 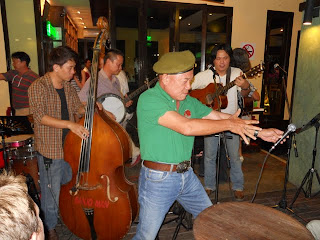 As a celebration of our last night, we headed back the Tiger Kingdom in Town and splashed out on some nice food and enjoyed the bands that were playing, especially the drunk Thai man who was very exuberant with his dancing whilst singing.  A great last night to part ways.

The following day, we hung out for a while the next day waiting for Tom and Nicky's bus which turned up a little late and following some handshakes and manly hugs, I was suddenly alone, the first time in two months.  My feelings were mixed as I would have loved to have travelled on with them but just I wanted to head up North to Pai before heading South towards Bangkok.  I stayed one last night in the Royal Guesthouse as my bus up to Pai was leaving the next day.