The bus journey was in fact a small nightmare,  sleep was near impossible as the padding on my seat is all but disappeared and the metal bar rubbed hard against my butt bones.  The windows were far too high meaning you couldn't just stare out of the window at the countryside passing by.  You could see the stars up in the sky, which was amazing but they get pretty boring after a couple of hours as they don't change.  My MP3 player was running low on battery power and my backup battery charger was safely stowed in my bag underneath.  I feared many hours of uncomfortable, sleepless and boring night's drive ahead.  The bus weaved around the narrow roads in through the hills in North Western Laos and I was probably thankful not to see where we were driving.

We stopped after a couple of hours and I was able to retrieve my battery charger from my bag.  Brilliant, I had entertainment for the following god knows how many hours this trip is going to take.  Intermittent stops allowed us to stretch our legs, relieve our bladders and get a glimpse of what the outside world looked like.  The bus felt more like a cattle transporter than a vehicle to transport humans.  A couple of hours towards the end of our trip and as the sun began rising above the hills, I managed to secure a couple of seats at the back of the bus which were a little more comfortable, although as I looked down towards my feet, an empty Coke can had attracted a swarm of ants.  I simply accepted it and proceeded to try and sleep for a while.

Next thing I remember was being woken up as our bus pulled off the road and onto a rough piece of ground that acted as a parking lot for the bus station.  We were in Hua Xai, the frontier of Laos and Thailand where we cross into a land that is the only country in South East Asia never to be colonised by a European power.  We had secured a space on a sangthaew that took us into the centre of town and to the border crossing.  An odd affair to say the least.  The border checkpoint was a tiny office on the river edge and looking over the river you could see Thailand in all its glory.  It wasn't long until we had received our exit stamp from Laos and were herded onto a long boat for our one minute ride to the other side.

We landed on the river bank on the other side and followed the crowd to the checkpoint which you could have easily avoided if you wanted to.  There was no order, no line, just fill in your arrival card and shove your passport through the hole to get it stamped.  With the stamps officially welcoming us into Thailand we found a car that would take us to where we wanted to go, a bus to Chiang Mai.  I felt an urge of relief as Thailand's roads were in much better repair than their neighbours and, maybe more importantly, they drive on the correct side of the road, the left side.  The driver dropped us off at a bus office where we booked our tickets onto the next bus leaving for Chiang Mai.  We had to wait a couple of hours but we kept ourselves busy by visiting the 7Eleven across the road to buy some tasty snacks and played Uno until the bus arrived.

I was really looking forward to getting on our first bus ride in Thailand as I had heard travel here was far easier and more comfortable.  I had grown tired of the constant breakdowns, delays and uncomfortable squashed journeys of the last few countries I had travelled.  It was time for some relaxation and comforting.  This however, was not the way things were going to work just yet as the bus had three seats to the right and two to the left, which would be fine if they weren't Asian size seats.  Nicky, Tom and I were allocated three seats on the right hand side of the bus, I was on the aisle seat and could only fit one butt cheek on.  Not good!  I was looking forward to having a few hours sleep before we arrived in Chiang Mai instead I spent the next couple of hours moving from empty seat to empty seat but kept being told to move back to my assigned seat as more passengers kept getting on.  The ticket man, finally came to me an hour before our final destination and told me that I could now go to the back of the bus where there were two empty seats where I could spend the rest of the journey.  I didn't get any sleep though as I had met a group of students who were on their way back to University following some time at home and talked with them for some time about their studies and my trip. 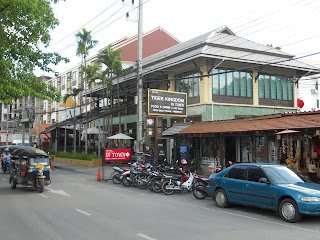 It wasn't long until the bus pulled into the bus station in Chiang Mai and we stepped off the bus, I said farewell to my new Thai friends and negotiated a price for a sangthaew to the Royal Guesthouse which a western girl at the bus station had suggested we stay at.  I'm glad she did get us to stay at this wonderful little guesthouse as the staff were immensely accommodating and the room was comfortable.  Tom wasn't feeling too well once we arrived and decided to stay behind to watch a few episodes of 'An Idiot Abroad' whilst Nicky and I went on a hunt for something to eat.  We ended up in a restaurant just the other side of the river called Tiger Kingdom in town which offered a variety of dishes accompanied by live music which is always a bonus.  We sat there enjoying the music for a while and savouring our fruit shake before heading back to the hotel to get some well needed sleep before going to visit the Tigers the following day.