I feel under my seat for the lever to recline my chair. Bingo! The chair back reclines and I breathe deeply whilst staring contently outside the window remembering the great times that Vang Vieng delivered. A few days of relaxation, beer, kayaking, beer, trekking, beer, caving, beer and throwing ourselves into the river a number of different ways. This bus is only half full and is really quite pleasant as we have two seats each and have wonderful air conditioning blowing strongly. We're off to Luang Probang, our last destination in Laos before heading over to Thailand. 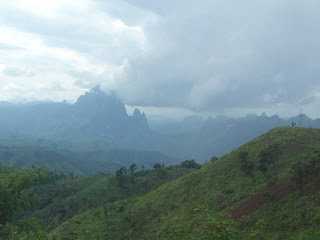 The bus journey was going extremely well, we stopped once for something to eat and drink after an hour or so on the road. As soon as we got back on the road, I slipped into a sleep only to be woken up again later by the bus stopping and people began getting off. I was disorientated for a while and thought, why are we stopping again so soon. Tom said to me, “We've got to get off, the bus is broken down.”. I seriously thought he was taking the piss as the last few journeys have resulted in many breakdowns. I laughed it off and followed them off the bus, across the road into a small roadside café. By the way people were acting I suddenly realised he was in fact telling me the truth. Questions were beginning to be asked, “What's happened? Why are we broken down?” The driver informed us that due to the steep gradients, the bus wasn't able to climb them with the air conditioning on. Tom fired out a simple solution of “Well, why don't you turn the air conditioning off?”. The driver dismissed this and said that he did not know how to and if it was possible. Ridiculous.

No matter, a big bus was hailed down and we squeezed onto there, thankfully they had enough seats for all of us. I believe they concocted this story about breaking down as they didn't want to take a half full bus to Luang Probang. It really didn't bother me though as it's Laos, there's nothing to worry about in Laos. This new bus, although air-conditioned and comfortable enough, was a rougher ride as we sat on the top deck well above the road. Underneath us was the driver and the storage room for luggage. The twists and turns through the mountains had us continually swaying from side to side and hanging on. The views, however, were breathtaking.

Finally we arrived in Luang Probang early evening and headed to the Spicy Laos hostel. As today is my birthday, strange to have a birthday and spending most of it on a bus, we headed out for a meal and a few drinks. Luang Probang's famous night market was in full swing by the time we got down town on our way to find a restaurant. What a fantastic little market it is too, it takes you around 10 minutes to get through walking at a steady pace and dodging hanging objects.

Tom disappeared following our meal for a while only to return with a present for my from them. It was an 'In the tubing, Vang Vieng' t-shirt. Brilliantly ironic. I had been commenting on how I wouldn't get one of these because everyone seems to pick one up on their way through Laos but now I had one and I was determined to wear it. We headed back to the hostel, changed into my new t-shirt and then headed to the bowling alley, which is a popular hangout for travellers as it's one of the only places open and selling drink until late.

The following morning I wake following one of the worst night's sleep I have had since embarking on my trip. The dorm room was a sweat room. The two fans that rotated on the ceiling did not even touch us. A layer of thick sweat enveloped my entire body and my thoughts went back to Mongolia in an effort to cool down. A well needed shower was required, carried out and I headed downstairs for some breakfast.

Nicky was already down there, sitting outside on one of the stone stools taking with another guy. I walked up to them and introduced myself to the new person sitting at the table. “How are you? I'm Andy.”. “I'm Mike, nice to....” He paused and inquisitively stared into my eyes. It didn't bother me as I was doing the same thing as my brain was processing memories from long ago into the forefront of my mind. “I know you!” Mike said. “And I know you!” I returned confirming our previous acquaintance. It was Mike Curtis, a guy that I had been at school with for many years, although he was in the year above us, we used to hang out. I had not seen him in many many years, not since we left school. What a small world it certainly is. I'm the other side of the world in Laos and I meet an old friend.

Following the Meeting Mike, we headed back to the swimming pool we had found the previous day for a nice refreshing swim. As it had rained, the road leading towards the swimming pool was muddy and my flip flops were continuously getting stuck in the mud. We got there though, finally getting to a swimming pool, something that I had wanted to jump in for a very long time and I was not disappointed. Jumping into the cool water of the pool and floating around was a magnificent relief and as they say, good things come to those that wait! It wasn't fantastic catching up with Mike and finding out that he was now a stand up comedian, something I definitely would not have pictured many years ago.

Luang Probang is a very beautiful city in the North West of Laos and kind of reminds me a little like Hoi An in Vietnam. It's relaxed, plenty of restaurants, night market full of wonderful things and food markets with all kinds of delicious food to choose from. It's a shame that we're leaving so soon but Nicky and Tom had to get a move on as their flight from Singapore to Darwin was rapidly approaching and we thought it was just time to move on and into Thailand, a land full of promise and punctuality. So we had our final meal in Luang Probang with Mike and grabbed a bus to Hua Xia, the border town between the two countries. There is an option to take a boat up the Mekong to the border crossing, but we weighed up our options, deliberated over cost and time factors and came to the conclusion that we would just hop on the night bus. We finished our meal and headed briskly back to the hostel and as soon as we got there the sangthaew was already there to pick us up... early!