With sweat dripping down my back, I look down into the ditch out the back of the guesthouse with complete disappointment. According to the Lonely Planet this ditch should, in fact, be a wonderful refreshing swimming pool. OK, so obviously they worked a little too hard on digging the hole, they had to take a breather for a couple of years before finishing it off. What else does this place have to offer, TV? Yes, but no channels which isn't good as Tom and Nicky want to watch the Man Utd match. Air con? No just fans, which isn't too much of an issue but still a negative point. They did however, have beds and showers. We were torn whether to stay or not. We had walked a fair way out of the central part of the small town of Ba Na Hin to find this oasis but in the end we decided not to stay and find somewhere closer to town. We did have to wait whilst Tom finished his shower though and we left extremely swiftly.

We did find a nice room in a hotel closer to the centre with a double bed, a single bed, a TV and wonderful air conditioning. It was a fairly new hotel as many of the accommodation in Ba Na Hin is as it begins to experience the tourist boom with travellers using the town as a base camp for the Konglor Cave. Finally, we had arrived at our destination albeit one day late. The night spent in Vieng Kham, I should say the few hours we spent there consisted of a cramp nights sleep trying not to fall of the bed that all three of us shared and finally getting the bus straight to Ba Na Hin in the morning.

The names of places here are extremely confusing as they have two or three names for the same place so with that and the long bus journey, I never really knew where we were! Ba Na Hin is around 50km away from the Konglor Cave and our plan was to either hire out motorcycles or take a Sangthaew but for now, all we wanted to do is get something to eat, drink and relax. The town of Ba Na Hin has 3,000 people living in and around it, many of them a foreigners involved in building a damn. As the night falls over the town, darkness spreads as street lights are minimal if not absent. Torches are a very good idea for a walk into the central part of the village as pot holes and ditches line the road. It's very quiet here and you only see a handful of people wondering around.

On our walk into town accompanied by the hotel's dog who liked to follow us wherever we went, we dropped into the tourist information chalet which was run by a eccentric 30 year old Laos guy who was full of enthusiasm for his surrounding countryside. We ended up organising motorcycles for our trip to the caves the following day. He also told us about the bus onwards to Vientiane. 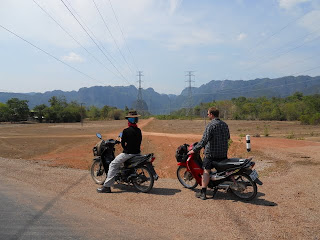 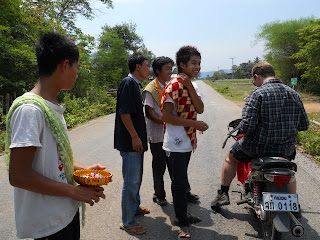 The journey to the cave was absolutely stunning. Travelling through the green fields, hills and little villages where locals stopped you with a rope across the road to offer you a drink for a small donation. They were absolutely fantastic and generous people who didn't speak English but were full of smiles and laughter. The shot that I drank was extremely potent and I was concerned that it was pure gasoline and my vision would disappear whilst negotiating pot holes on the dusty road.

It took us around an hour to travel the 50km to the cave and we arrived at the entrance to the park where we had to stop at the barrier to pay the entrance fee to the national park area. We parked our bikes up and found the hut where all the guides were hanging out, drinking, talking and smoking. We negotiated a price for a boat trip through the cave and were handed life jackets. The guide got up and led us down to the cave entrance.

We climbed in the boat and I was struck by the darkness that enveloped inside the cave as the guide pulled the throttle on the engine and we headed into the unknown. The cave and is actually part of the Hin Phuo river that runs through 7.5km underground. The Laos lady on the bus from Pakse warned us not to go in there alone as some ignorant tourists have in recent months and have either died or had to be rescued by the locals. It is advisable that you wear sturdy waterproof footwear and bring a good torch, neither of which I had.  As we travelled deeper into the cave, the only light that shone was that of the guides as he searched from side to side, up and down for rock outcrops that stick up through the water. These guides are truly amazing and they really do know this cave like the back of their hands.

At several points along the cave, we had to get out of the boat as the water level was too low to carry us over the river bed. Our first stop required us to get out and follow a pathway up a stony bank. As I climbed from the boat I had my first experience of how fast the river flows and my flip flop on my left foot got taken for a ride down the river making me scramble like a mad man to catch it. The pathway through over the rock outcrop had been lit with coloured lights and was quite beautiful until the lights unexpectedly went out. Was this part of the tour or were we truly in the midst of a power cut without a torch? There are not very many places where you can experience true darkness, as there's always light around whether it's the standby light on the TV or the stars in the sky. It's quite harrowing, your mind completely awakens and your pupils expand striving to gain orientation of your surroundings. We stood still, nervously laughing and questioning whether the lights would come back on again. My hand clenched onto the rope that marked the pathway and a wearily place one foot in front of the other making slow progress. We had no guide with us as he was currently in the water dragging the boat over the shallow water. 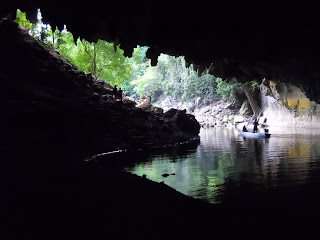 Thankfully the lights lit up again and our eyes readjusted. A sigh of relief was heard from all of us as we continued on the path back down to the other side of the rock to rejoin our guide and head off again on our trip through the middle of the mountain. I'm glad the lights went off as it gave us the experience of being in true darkness and wonder what it would feel like to be lost in this mammoth cave. The water is cool and the subtle sound of dripping water can be heard from above. At times, the cave opened up into huge chambers which were truly awe inspiring, there are no words to describe the beauty of this natural wonder that sits in the isolated south of Laos.

Up ahead, the cave lightens gradually and suddenly we're out in the open water speeding through the jungle that surrounds the river. My hands quickly search my head for sunglasses as my pupils shrink causing slight painful readjustment. The boat was slowly grounded on the banks of the river where we got out for a short while for a drink in a Laos tourist trap before we headed back through the cave to our starting point. 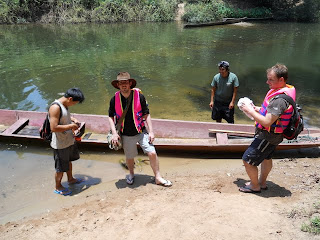 We finished our trip off by have a swim in the small lake that accumulates at the entrance to the cave. Wonderfully refreshing swim, however, dark clouds began forming above our heads and it wasn't long before several load cracks of thunder were heard accompanied by drips of rain. It was time for us to take refuge under the trees whilst a short downpour took hold. Once the rain had stopped we climbed back on our bikes and began our trip back to Ba Na Hin. Our stomachs were grumbling so we stopped at the first restaurant we found and it was good timing as the storm above awakened yet again and this time heavy rain battered the countryside. 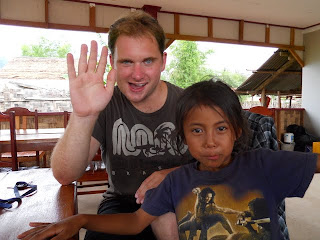 The restaurant was in a small guesthouse which was run by a very sweet and accommodating family who welcomed us in with a shake of the hand. Their daughter had her play area in the corner with toys spread across the floor. She was so happy to see us and kept showing us her toys and drawings. To feel so welcome in somebody's house is a truly fantastic experience and will be memories that will not be forgotten. We got back on the road again and sped off along the road back to Ba Na Hin for an evening of food, fruitshakes and shithead although the intermittent storm kept inducing power outages. The journey from Pakse to here was definitely worth it! 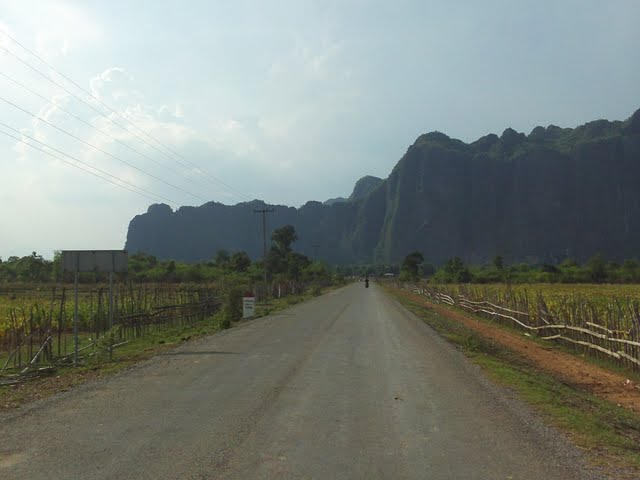