Ah yes!!  Finally the bus that I’ve been dreaming of with big comfortable reclining seats.  The bus is already packed out as it’s been travelling from Bangkok.  I am shown to my seat and I sit back and relax.  I suddenly feel something tap on my forehead.  I open my eye and manage to avoid the next drip which was coming from the air conditioning above.  Bloody typical, when I finally get the bus I’ve desired, I get one with a leak!  I fish around my bag for a while and fish out a tissue to stuff inside the hole.  Success, it worked and now time for some sleep.

Three hours went by too soon and the bus pulled over just outside the town of Chumphon where the majority of people got off to catch a connecting ferry to Ko Phangan.  Those all headed off in a couple Songthaew and I was told to wait for ten minutes and my bus would arrive to take me to Ranong.  It was 4am, still dark, quiet and I had been left alone.  There were a few roadside cafés which were closed up, so I took a seat outside one and waited.  Ten minutes went by very quickly, no sign of a bus.  Thirty minutes passed and I began to get anxious.  A few buses passed by but none were mine, most of them were heading to Hat Yai.  An hour passed, still no sign.  Two hours.  Nothing.  It was now 6am, the sun had peaked and light illuminated the city.  A café was opening up and I had had enough of waiting, so went in to ask the lady whether she knew of a bus stopping here for Ranong.  She had no idea but took my ticket which had a telephone number on the back and rang it.  The person on the other end said that there was a bus leaving at 7.30am and the lady asked for them to pick me up and take me to their office.  This lady was extraordinarily friendly and willing to help a stranded tourist.  I sat there for another half hour, enjoying a refreshing drink whilst waiting for the driver to collect me.

I arrived in Ranong around 10am and began the routine haggle for a Sangthaew with Allesia and Matao, two Italians whom I had met on the bus.  We successfully cut the price to an acceptable level and went on a hunt for somewhere to stay.  We dumped our bags and headed for a walk around Ranong.  A bustling city on the border with Burma, the market was an amazing experience, a working market for local traders not touristic in anyway.  I was completely knackered from a night of no sleep and decided that I would head back to the hotel for a couple hours sleep.  A couple hours turned into far too many and it was dark when I woke.  I was to meet Allesia and Matao for dinner but had missed them and unfortunately never saw them again.

The day had come, an exciting trip to Myanmar, a communist country bureaucratically shielded from the rest of the world.  I was to head over for a brief visit just so that I could exit Thailand and enter with a further 14 days.  I got the bus to the Thai immigration department in town who were to stamp me out but I had some outdated information and in recent months they have initiated a border crossing at the port itself which makes it so much easier.  I negotiated a price for the return boat trip and climbed aboard.  I was, as usual, the only foreigner aboard and again, had no idea what was happening!  The skipper handed out life jackets as we steamed out into the Andaman Sea towards Kawthaung, Burma.  On the way we stopped a couple of times at checkpoints that had been erected in the middle of the estuary.  They didn’t care about my passport but the rest had to show theirs.  Most probably just checking that nobody is fleeing the persecution of Myanmar’s military.

The run down buildings of Kawthaung appeared in the distance.  Already you can see the difference between Thailand and Myanmar.  We moored on the shore and all disembarked and made our way to the blue wooden immigration hut that.  There was no queue.  I walked in and handed over my passport, a crisp $10 note and a photocopy of my passport which they kept for one reason or another.  I was in there for about two minutes before I got stamped in and out of the country at the same time.  I took a very brief walk around the town just to get an idea of what goes on. The market was busy selling items of all sorts and I got the feeling that the Myanmar government have erected this town as a showcase for visitors and traders from Thailand.  I finished my walk and headed back to the port to find a boat to take me back to Thailand.  I had only paid half of the fare so it didn’t really matter which boat I got on.  A man approached me and offered me a spot on his boat for a decent price.  I accepted.  A man began shouting from a couple boats down and ran towards me.  It was the skipper who brought me to Kawthaung and he was quite justly annoyed that I had gone aboard another boat.  I soon explained things and apologised to the other man as I transferred back to the original boat. 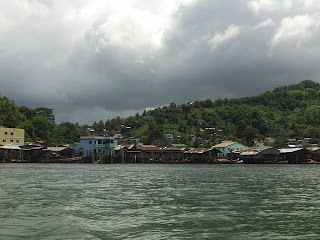 The clouds loomed above.  Dark and heavy, drowning the return boat ride in an eerie atmosphere.  We made it back just in time for the clouds to release their pent up water.  The rain was heavy and unrelenting.  I ran to the road and grabbed the songthaew back into the centre of Ranong where I took refuge in a restaurant and plotted my next journey.  I wanted to stay longer in Myanmar but couldn’t as although they give you a two week visa upon entering, you can only travel within a certain distance of your entry point, in this case only Kawthaung.  One of my plans was to enter Myanmar from northern Thailand and travel down south to Kawthaung, but it was near impossible with all the travel restrictions and the border crossing shutting sporadically.  My next destination… Phuket. 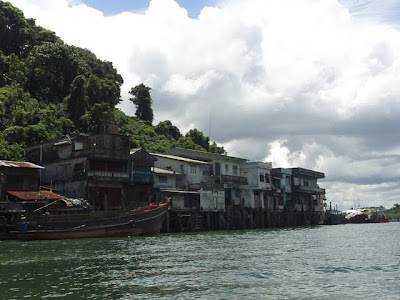