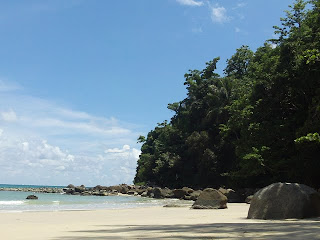 The rain was still pelting it down and I had under ten minutes to collect my bags, get a man to take me on his motorcycle to the bus station and buy a ticket.  The motorcycle ride was wet despite the poncho the motor bike driver wrapped around us forming a slightly more than usual uncomfortable intimacy.  We made it to the bus station with plenty of time to spare to buy my ticket, throw my bag into the hold and climb aboard the most luxurious local bus I have ever had the pleasure to experience.  Cool air conditioning, comfortable seats and, get this, wi-fi!  Although it didn’t work, but still, it had the option!

I headed straight for Phuket town and stopped for a couple of nights in Phuket Backpackers where I stuffed the budget and paid a little extra for an air conditioned room, and oh my am I glad I did.  I didn’t spend long in Phuket as wasn’t attracted to the place.  It was nice enough to walk around but nothing special for me at this point.  I took one day to get on a bus and head out to one of the beach resorts and was immediately struck by the tsunami warnings posted everywhere.

Boxing Day 2004 an earthquake of the coast of Sumatra causes a massive tsunami that spreads throughout the Indian Ocean, destroying coastlines and killing an estimated 300,000 people including many foreigners that were on their holidays.  The islands of Phuket and Phi Phi both fell victim to the enormous wave which destroyed do many miles of coastline surrounding the Andaman Sea and Indian Ocean.  There is little damage still apparent but with the amount of tsunami escape signs, it seems as though the emotional scars will remain.  The beaches are quite beautiful and relaxing but the island didn’t really have anything further for me to get excited about.  Getting to the beaches was relatively easy but getting back seemed to be an issue as no bus would stop for ages.  Finally one did stop and it was a bigger Sangthaew which had been totally enclosed with metal sides.  It was an interesting journey back as all the locals were finishing work or school and heading back to the city. 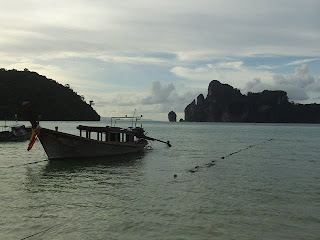 The next day, following a boat ride, I arrived on the beautiful island of Phi Phi.  The approach literally takes your breath away.  Stunning cliffs shoot out of the water topped with green trees and surrounded by crystal clear turquoise water.  Phi Phi is merely a speck in the ocean and was easily overwhelmed by the tsunamis destruction and was largely wiped out.  It has been built up again, which is a tragedy in many ways as the natural beauty of the island has been overshadowed somewhat with concrete buildings containing western style bars selling buckets of alcohol to tourists. 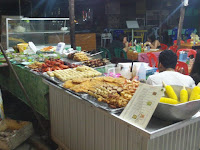 Weaving my way through the touts by the jetty I embarked on my mission to find somewhere to stay.  The alleyways of Phi Phi are small and weave around buildings in a maze like fashion.  I found a lady+boy=ladyboy who had a spare room in her guesthouse.  The guesthouse had four or five rooms which were comfortable enough with wonderful fans.  I dumped my bags and headed straight to the beach to relax and finish reading ‘1984’.  I finished off the day with a banana shake at a beech bar and some delicious seafood, stir fry thing from one of the food stalls.  It was extremely spicy! 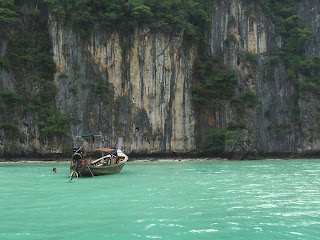 The highlight to my time on Phi Phi was the amazing boat ride I took to the neighbouring island where the waters are crystal clear.  The boat left the main jetty and set off into the open waters towards our intended destination.  We were kitted out with snorkels and waterproof bags for our valuables.  Our first stop was just a few hundred metres around Phi Phi’s coastline where we were given the opportunity to go meet some monkeys.  I have already taken a dislike to monkeys since being attacked by one in Phetchaburi, so I kept my distance.  I wouldn’t mind them so much if there wasn’t the fear of contracting rabies.  I heard the following day that a man who had been on this very beach sitting calmly with some monkeys suddenly got attacked and bitten several times.  Luckily they have some anti-rabies drug on the island. 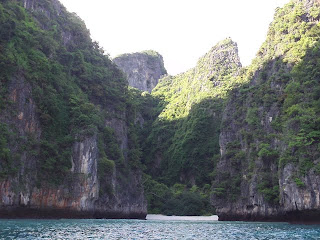 Our next stop was at the other island where we all jumped off and swam in the crystal clear waters and searched for fish.  There weren’t many in this area but we stopped a little further out and the colourful fish came out and was quite a memorable site, despite the odd pieces of rubbish floating by which obviously spoils the idyllic feeling of the island.  Many of you will know the film ‘The Beach’ and the magnificent beach which it is set, well this is on that very island but as the sea conditions we weren’t able to access the beach the easy way.  Instead, the boat pulled into a bay on the opposite side.  The waves were rough and gave me my first experience of what feeling sea sick or travel sick is like.  We had to swim around 150 metres to the shore in these choppy waters which, if you weren’t careful (and I wasn’t) will force you against the rocks.  Having recovered from being smacked against the rocks, I grabbed hold of the rope and dragged myself to the safety of the steps that led up a small cliff, through some jungle and emerged on the beach.  Oh my god was it worth it.  The most awe inspiring beach I have ever been to, and thankfully the bay was clear of boats because of the sea conditions.  Just me and ten other tourists spread out on the white sand overlooking the karst landscape that jets out of the sea.  Unfortunately my camera is not waterproof and I wasn’t able to take any photos, however, it’s well engrained in my memory.  Beautiful.  The journey back to Phi Phi was gut wrenchingly painful.  The waves towered high above us as the skipper took care navigating around strong currents, speeding up and slowing down in relation to the waves.  Once we reached shore, we were all very much relieved to get onto dry land.

I only spent two nights on Phi Phi and that was enough for me as I couldn’t stand the PUTs any longer.  I decided to move on and get the ferry to Krabi where I can continue my journey south towards Malaysia.  But before I left, I was sitting in a café enjoying breakfast, drinking yet another fruit shake and talking to an American man who had just received a double knee transplant in Bangkok and was ‘recovering by the sea’ when the biggest highlight of my trip to Phi Phi arrived.  “ANDY!!!!” I heard a young lady shout.  I looked over and saw the fantastic Kathy, whom I met on the bus from Mui Ne to Ho Chi Minh in Vietnam.  We had tried to meet up repeatedly with her throughout Cambodia and Laos but kept missing her.  It was great to see her again.  We spent the next few hours together and with her two friends.  Firstly in a tattoo parlour where her friend got a tattoo on her hand and Kathy deliberated about getting one of a watermelon behind her ear.  However, after several attempts at the artist drawing the melon, she thankfully decided not to.  It was quite interesting watching the tattoo artist do his work with a bamboo needle which is far more impressive than using the traditional needle.  Following the tattoo parlour we grabbed a couple of beers and caught up on the beach….  What a beautiful end to a quick trip to Phi Phi…  (And no…. Kathy, you are not one of those PUTs I refer to!)