The Death Railway, Ladyboys and Monkeys - Kanchanaburi, Phetchaburi and Hua Hin - 20-24 May 2011

June 1942, the occupying Empire of Japan instigated the project to build a 258 mile railroad between Bangkok and Rangoon, Burma to support its forces in the Burma campaign.  180,000 Asian and 60,000 Allied prisoners of war were used as forced labourers to construct the rail line.  Thousands of people lost their lives during the remaining years of the war.  It is estimated that over 100,000 people died in the course of constructing the railway due to appalling working and living conditions, malnutrition and torture. 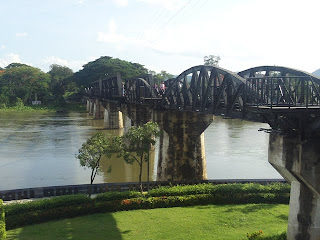 Stretching out in front of me is the Bridge over River Kwai, which is without a doubt the most iconic remembrance to those that perished and suffered whilst building the railroad.  The bridge sits a kilometre or two from the centre of Kanchanaburi and although it’s been rebuilt, walking over the bridge and remembering those hundreds of thousand people that died is quite something.  There are two museums nearby dedicated to the Thailand-Burma Death Railway which display artefacts retrieved from the period and gives a candid description of how the railway was built at the cost of human life.

Kanchanaburi is a small city an hour or two west of Bangkok which was easily reached by a surprisingly comfortable, cool and timely minibus journey.  I stopped there for a couple of nights to explore the railway and surrounding area.  I stayed at the Jolly Frog Backpackers where I encountered my first ‘is that a man or a woman?’ quandary as the ladyboy served me my lunch and well needed banana shake.  Ah, those banana shakes have become quite an addiction of mine!  Whilst in Hanoi, I met a Canadian lady who had lived many years as a prominent man, riding motorcycles, having children and generally doing the ‘man’ thing.  She explained to me that she never felt comfortable and was unable to come out and show her true feelings due to the society she was in.  She finally got the courage to express her innermost feelings to her friends and his family, and although it was expectedly a huge shock, they came round to the idea and accepted her for who she was.  Her story was amazing.  She was now travelling with her long friend Brian who is an author and publisher.  She had already been through Thailand and absolutely loved it as they immediately accepted her without question, she stressed that not only did they accept her, they loved her.  She was going to go back to Thailand and get breast implants but explained that she felt too old to have the full genital operation.


I took a motorcycle and explored the surroundings to the city and the amazing countryside.  I headed out of the city in search of the waterfall that is a must visit, however it quickly became apparent that I would not make it at the current speed of my motorcycle.  So I pulled over at some ruins and reassessed my route and decided to head to a nearby lake instead.  Travelling along the main road was not that fun as lorries and cars sped by without care, but once I turned off onto a smaller road, the traffic disappeared and I was allowed to meander at my own pace.  I looked to my left and noticed a massive black cloud overhead and saw that it was raining, so I thought it would be a great idea to become a storm chaser and head straight towards it.  I soon realised that this was not such a great idea as the rain pelted down unforgivingly and made it impossible to see ten feet in front of me.  I took refuge under a tree and waited for the storm to pass before heading on to find the lake.


The next day, I decided it was time for me to leave and head to Phetchaburi where I had planned to stop and visit for one night.  I found the Ramian Ranong Guesthouse which was tucked beside the incline of a bridge by the river.  It was run by a couple of really friendly people who were there to help and provide you any snacks, drinks or advice on what to do in the city.  I thought the city was a wonderful reflection on an everyday Thai city with very little tourism being shoved in your face.  I walked around for a while and took in the feeling of a working city with the occasional stop in a 7eleven to cook of for a while… that’s when I found Cadbury’s chocolate for the first time on my trip.  I absolutely adore Cadbury’s chocolate and couldn’t resist buying a bar despite the £1 price tag.  I rushed back to my room where I opened up the bar like an excited child and devoured the slightly melting milk chocolate in anticipation of a delightful taste.  All I was confronted with was disappointment… 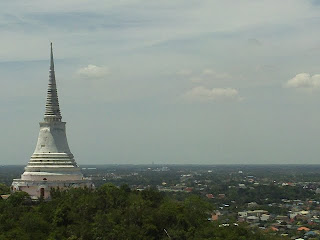 Phra Nakhon Khiri Historical Park sits on the outskirts of the Phetchaburi and is a collection of palaces, halls and temples situated on top of a hill which overlooks the city and the surrounding countryside.  On my morning walk to the site, I experienced my first violent attack from a local.  As I was walking around the base of the hill searching for an entrance into the park, a cheeky monkey jumped from the ‘Welcome to Phetchaburi’ sign and clung onto my shoulder.  I screamed like a girl, shook off the potential rabies infested animal and ran away with my broken flip flop trailing behind me.  This unprovoked attack set me on edge as I walked around the park which is home to hundreds of monkeys swinging from the trees.  Although the locals seem to have made some kind of deal with them and seemed to be cohabiting without any issues.  The view from atop the hill was spectacular and I spent a while chilling out enjoying the cool breeze before heading back down to the heat of the city. 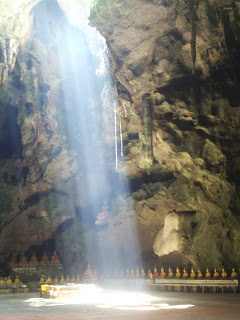 My next item on my list was Tham Khao Luang, a spectacular cave that houses a reclining Buddha, some images and statues which sit amongst the stalagmites and stalactites.  As soon as I entered the complex, my fears turned back to another potential monkey attack.  It’s like avoiding the classroom bullies.  The entrance to the steps that lead down into the cave was a small gateway which was surrounded by monkeys.  I quickly summed them up and convinced myself that they were not a threat, so just took a deep breath and walked briskly through them and down the steps into the amazing cave.  The sunlight shone through the gap in the cave and produced a strong beam of light which looks like a waterfall falling onto the Buddha below.  The serenity within the cave was overwhelmingly refreshing and if it wasn’t for the tuk-tuk driver waiting for me outside, I could have stayed in there all day just watching the pilgrims offering their gifts to Buddha.


There was no time to waste now as I made a promise to myself that I wasn’t going to loiter in any one place for a while, so I got on a bus that afternoon to Hua Hin which I thought would be a nice experience as I hadn’t been by the sea since Sihanoukville, Cambodia.  I was, however, thoroughly disappointed and to put it candidly, disgusted.  The city was the first time I had witnessed the onslaught of sleaze that has unfortunately overshadowed a certain part of Thailand.  Old western men paying for their Thai brides and walking around like they are a big deal.  No, I’m sorry this is disgusting and I am appalled that people can use money to pay for love.  Here’s a fact for those men….  They don’t care for you, they care for your money so their families can get food and education.  I couldn’t bear this place for any more than one night as every corner I turned I would see this exploitation and sex trade slapped in your face.  I swiftly booked my onward bus ticket to Ranong on the western Thai coast where I would briefly pop over the border to Myanmar to attain another two week Thai visa. 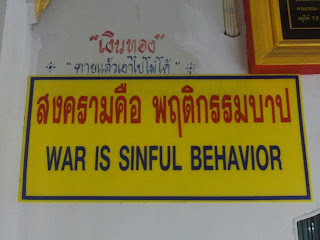 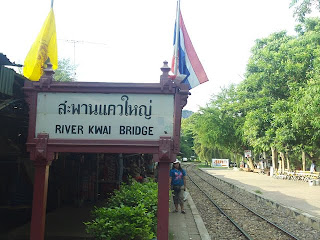