“Please can you stop the bus?”  The young Japanese man who was sat next to me on the front row of the minibus pleaded with the driver.  We were just five minutes out of Pai, descending along the winding road back to Chiang Mai and it became all too much for this man’s stomach.  We turned a few more corners as the driver searched for the safest place to pull over.  The Japanese man became impatient and anxiously tapped his knee.  I was concerned that he wasn’t going to hold on until we parked up.  The bus stopped on the side of the road, I promptly opened the side door, quickly swung my legs around out of his way as the man launched himself from the vehicle and expelled his stomach contents on the small patch of grass that encroached the road.

The journey down the mountain included multiple vomit stops.  As I said before, this road can make even the strongest stomachs churn as drivers hit the corners as fast as they can.  One stop coincided with another to help out a lady who had come off her motorcycle after slipping on some oil.  The lady was thankfully safe but her oranges were sprawled across the road.

Following a brief stop in Chiang Mai for some food, I boarded my sleeper bus that would take me Bangkok, my next destination on my trip.  It’s a great feeling to be heading south again as for so long it felt as though I was going back on myself as I travelled up through Laos back towards China.  From now on, it’s straight to Singapore where I will board a flight to Perth, Australia, not that I had booked that flight yet or decided when that may be! 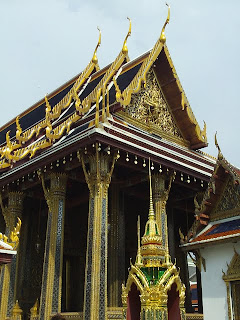 The bus journey was predictably uncomfortable as the VIP sleeper bus turned out to be just a normal coach.  I stared enviously at other buses that pass by with huge reclining seats and wondered when it would be my turn to get a comfortable trip.  This bus, however, didn’t break down… until we were on the outskirts of Bangkok.  The sun was just peaking above ground spreading a red glow over the cityscape.  The bus stopped on the side of the road, however, we didn’t get off the bus for another hour, we didn’t know what was happening but everyone just took the time to sleep for a further hour.  Some people were getting agitated as we were so close and yet so far away.  Some gave up waiting and flagged down taxis.  I waited for some more time until another bus turned up which was going to take us the rest of the way.  This bus was one of those that I desired most.  A comfortable, big chaired bus and I enjoyed it, despite it was only an hour as we weaved our way through the morning traffic.

I found a guesthouse near the infamous Khao San Road with an extremely simple room that comprised a single bed and a fan.  No more was required.  I dumped my bag, had a shower, a little breakfast and headed out for the whistle stop tour of Bangkok.  I made my mind up that I was only going to spend one night here and to move on to Kanchanaburi the next day.

I had no idea where I was going.  I briefly looked at the Lonely Planet guide and decided to head to the Palace via a short river cruise.  My god was it hot and humid in Bangkok.  I arrived at the magnificent Grand Palace with its amazing golden tipped stupas and temples that glimmer strongly in the sun.  The massive complex was built during the eighteenth century to house the royal residence, throne rooms, government offices and home to the Emerald Buddha.  The present use of the Grand Palace has changed somewhat during the twentieth century as the abolition of absolute monarch gave the government more powers and thus moved out of the complex to separate themselves from royalty.  The royal residence also relocated to a palace across the river where King Rama VII currently resides.  They now use the palace for ceremonial purposes only. 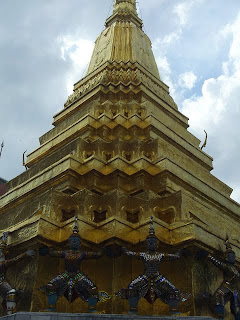 I roamed around the Palace for an hour or so in my long baggy trousers that I had to hire in order to enter in respectable attire.  At each entrance there were ladies handing out bottles of water to visitors as it was terribly hot, especially with trousers on.  The decoration on the temples was astonishingly intricate and beautiful.  Shinning glass reflected coloured beams of sunlight off in many directions and gold stupas rose high into the sky.  I was unfortunate, yet fortunate not to be able to see the Emerald Buddha as there was some sort of religious ceremony going on which filled the hall containing it.  I stood there and watched the proceedings going on, beautiful sounding prayers filled the hall and were played on loudspeakers outside.  Even though I am not religious, there is a magical enchantment to religious ceremonies, the harmonic sound of singing, the passion and sincerity that envelops the speaker’s voice as they preach their religious beliefs.  It really is one hell of a theatrical performance, although to have as much audience participation in the theatre would be a dream. I wandered further round the palace grounds and visited the throne rooms where I got reprimanded by the guard for taking a sneaky photo.  I did feel slightly bad, although the only reason you can’t take non-flash photos is because they want to sell you a nice little book containing all the photos you could take yourself.  It was the end of a long and very hot day, the Palace was closing up which prodded me to leave for my next destination, the Sala Chalermkrung Theatre.  I left the safe confines of the Grand Palace and thrust myself through the swarm of taxi/tuk tuk drivers that littered the pavements outside the main entrance.  Although I kind of wished I did take them up on the offer as the heat was stifling and I had quite a walk to the theatre.
Posted by Andy Adam at 10:47