I hear the rustling of Josh getting up and ready, waking Marlie up and although it was just after 6am I knew it was time for me to get up too. I got my shorts on and was marshalled out of the hostel by Josh, our leader on our expedition to Lotus Hill and the final item on my Superlative Tour of China. Josh had a strict timetable that he was adamant on keeping as we had to navigate the metro, walk to the ferry port and jump on a boat for a trip down the river. Matt and Marija were not with us, but Josh, Marlie and I were joined by Frenchie, I don't remember his name but I just remember him continually talking about his friend and this 'bitch' he hated and how she was ruining his life and wanted to know what to do. Things didn't exactly go to plan, we got to the port with plenty of time to spare but were informed by a very helpful lady that there was no longer a boat going to our destination, it seems Trip Advisor cannot always be trusted. However, the very helpful lady gave Josh some instructions on an alternative route which involved us riding the metro out to the extremities of the suburbs of Guangers and then hopping on a bus to Lotus Hill. It took a long time to get there but we got there and boy was it worth it!
Lotus Hill is home to the biggest 'one' in the world, the Tallest Bronze Goddess of Mercy in the World measuring a staggering 40.88m high and weighing 120 tonnes, this statue towers above the surroundings glimmering for miles around. The surrounding area is that of an abandoned quarry that the Chinese are proud to peg as 'Man's triumph over nature' and have turned it into a beautiful park accentuating the carved rocks with Mandarin engravings. As we wondered around the park we became aware that we were the only people wearing shorts and t-shirts, we weren't shocked at all as it was overcast, slightly chilly and a slight dibble descended from above. At the bottom of the steps leading to the bronze goddess a continuous plume of smoke hung at the summit. Once we were at the top hundreds of people were worshipping by lighting incense and burning cardboard tokens of sacrifice causing the thick black smoke. After circumnavigating around the massive Buddha, we emerged through the smoke and walked back down the hill through the peaceful cherry blossom garden and were stopped in our tracks by a swimming pool filled with rancid black water. 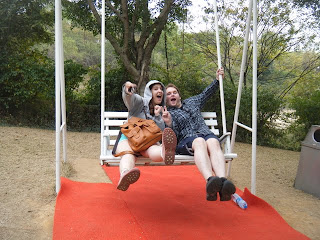 On the way out of the complex we childishly purchased some of those firecrackers, the type that you throw on the ground to provoke an explosion. Our main purpose was to fend off the touts trying to get us on their motorbikes or in their taxis. We threw them at their feet as soon as they approached us which shocked them but unfortunately didn't stop them pestering us. I wanted to save a few so we could bombard Matt and Marija in the evening time with them so I placed them in my pocket, however, just as we exited the metro station on the hunt for food my pocket unexpectedly exploded making everyone within a five metre radius jump out their skin.

Later that evening we returned to our adolescent place in the park with our cans of cheap beer and we were joined by Judy, a forty something lady from Devon who took it upon herself to cycle around the world. Her stories were truly inspirational. She told us how she cycled through Europe, Russia, Central Asia into China. It made me feel as though I should do something like this and after a long think I decided that I was going to cycle down the coast of Vietnam. From Ha Long City to Ho Chi Minh City.
On our last morning together Josh decided that he wanted to be more integrated in Chinese culture and thus bought a Jiánzi, a type of shuttle cock that is used in Asia mainly to kick between groups of people. The Chinese absolutely love this game and you could spend hours in any park watching in amazement as all types of people, young and old, kick the Jiánzi from one person to another. The do flip forwards to hit it with the soles of their feet and no matter what they do, they make it seem effortless. So we set out with ours and found it to be extremely difficult and hard work. The shop keeper joined in with us and tried his hardest to teach us to no avail. We later went to Remim Park and set up a circle of five. We became the entertainment of the park with people staring at us whilst walking past and laughing at our incompetence. We were soon joined by Kevin, a young Cantonese man who took it upon himself to teach us the ways of the game and through his patient coaching we improved greatly. As the afternoon went on, we were joined by Hannes, a Swiss who was staying in the same room as us in the hostel.
The sun was falling and we planned to head up the Canton Tower again, but this time to the very top. Even though it was expensive, we thought we should do this as we may never get another chance to again. With this in mind, we finished our game and dragged Kevin to a bar for a beer before grabbing some food in preparation of the 'Sexual' Tower. After forcing Kevin to let us pay for his drink we set off in search of food and with Kevin as our guide we followed him into a Dim Sum restaurant for dinner. Of course Matt and I were extremely excited about this despite it being on a Saturday, very unorthodox if you ask me! The meal was absolutely superb and was worthy being our last meal together. We never made it up the tower that night as Kevin kidnapped us and took us on a tour round the district of the restaurant. Although it was a nice area, it wasn't exactly what we had planned and disappointingly found our way to a bar for some drinks before heading back to the hostel.
I didn't need to look outside the window to notice that the weather outside had taken a turn for the worse as I could hear the rain was beating heavily against the window. It obviously knew that it was a sad day for me as not only my new American friends were leaving, Matt was also flying back to the UK. We all reluctantly got up and headed to Starbucks for breakfast, my first Starbucks for years but it was rather pleasurable sitting there in the comfy chairs watching the rain pour down outside with no sign of stopping. It was time, we had to accept that the weather wasn't going to improve and we headed towards the metro station to say goodbye to Josh, Marlie and Marija with a rendition of 'There's nobody, nobody but you' blasting out as they descended out of sight down the escalator. Matt and I were alone again and only a few hours later, I took Matt to the train station to get his train into Hong Kong. After nearly 4 weeks I was travelling solo once again.


Next time, The end of the Chinese Railroad, Nanning and onto Vietnam.
Posted by Andy Adam at 15:57