Guangzhou, the Dramatic End of Chinese Superlatives, 6 – 15 February 2011- Part One of Two

Legs bent awkwardly, back hurting and a slight bout of claustrophobia set in as Matt and I were squeezed in the back of the bus sharing the bed with a Chinese family, mother, father and two children. I had never shared a bed with a Chinese family before, but there's a first time for everything. I know they should only have one but the rule doesn't really seem to apply to everyone and there are now a lot of exceptions to the rule. It is a hot topic at the moment as families are struggling to cope as the 'one' child has to potentially look after six elderly people when their grandparents and parents grow old. It's not like the UK where we are over reliant on Adult Social Services to deal with our dependants, the family have to take care of their own and with people living older and longer there will be a problem. Looking at the rear of the bus, it was quite obvious that it wasn't meant for five beds at the back but they had put planks over the isles to create two more spaces. Matt was in the isle position which was good for his leg room, however, everytime the bus stopped, he would slide down the isle. I had hardly any sleep whatsoever, but thankful that it was a moderately short journey to Guangzhou. 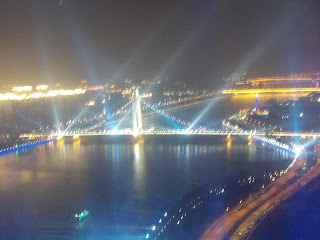 We arrived in Guangers at around 4.30am at a deathly quiet bus station somewhere in the suburbs. The city was dead quiet at that time and we walked out to find a taxi driver, not hard as they all congregate outside the station waiting for fares. We asked one driver how much to take us and he said 100 Yuan and refused to put the meter on, so we left him and moved to the next one. Unfortunately the drivers are all in on it and tell each other what they offered so they know not to undercut. Unlucky for them, we're not stupid and we walked away as you can always find a taxi further out and we did, he said 50 Yuan which was half what the others wanted so we dumped our bags in the boot and headed to Back My Home Hotel, in the Northern suburbs of Guangers.
The taxi pulled up outside the hotel just before 5am and we woke the night attendant up to check in. She was a young girl who had obviously been in a deep sleep before we arrived as her eyes struggled with the light like a new born baby seeing It for the first time. The girl didn't speak a word of English and it was a bit of a chore checking in but we were soon in our windowless room with two really comfortable double beds and we were set for a couple hours sleep before heading out for Sunday Dim Sum!
As we sincerely missed our Dim Sum the week before, we were not prepared to miss it again, especially in Guangers also known as Canton, so we headed out in search for a restaurant. Unfortunately we had no idea where we were in comparison to anything in Guangzhou, we walked outside into the scorching Cantonese sunshine to find a metro station but after ten minutes we resigned to the fact we had no idea which way to walk so we returned back to the hotel and luckily an English speaker had turned up and told us how to get into the city. It seemed as though we had to take a taxi to the nearest metro station and then get that into town. We followed the directions and within 30 minutes found a Dim Sum restaurant in a shopping centre where we ate some really brilliant dishes and I would say it was the best Dim Sum I had tasted. 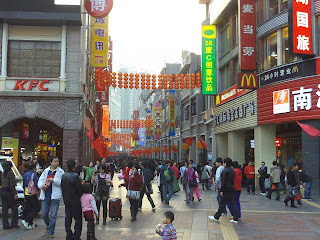 We stayed for only stayed for one and a half nights in the hotel before heading closer into town to the Riverside International Youth Hostel which was just a ferry ride away from the main hub of Guangzhou. There's not much to Guangzhou itself, it's great for shopping but the main pedestrian area was a 'Scooby Doo Street' where the shops are repeated over and over, sports shop, jeans shops, tea shop, sports shop, jeans shop, tea shop...
The Riverside Hostel was very much like the hostel in Shenzhen, full of people of their laptops and not talking so Matt and I went out to find an alternative venue to have some fun. We walked down the street where the hostel was on commonly known as 'Bar Street' but found the bars to be empty, closed or plain rubbish. On our search we bumped into three American people also looking for some place to have a drink, so we joined forces and headed back to our hostel to take advantage of the exceedingly cheap beer. The Americans, Josh, Marija and Marlie were in China teaching English and were on their Spring Festival holiday and unbeknown to us, this was going to be the beginning of something special. We finished our drinks and headed to one of the bars in an attempt to liven things up. I was shocked by the price of beer, they were asking for nearly £3 for a small bottle of beer. The bar was hilarious with a pianist on stage miming along to all kinds of music and a girl pulling people up to dance with her. During the evening it seemed that Matt and Marija had hit it off and Josh, Marlie and I decided to leave them to it. By that point I was a little inebriated and decided to walk around the block in search for a 7-Eleven and buy some snacks. I found one and fell through the doors, chose a packet of crisps and for some reason I ended up with a loaf of bread too. 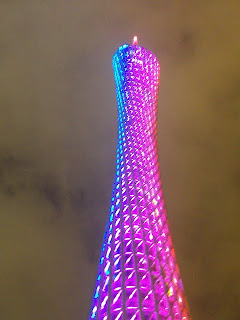 As Matt and Marija had hit it off so well the night before, they invited us to their hostel and to spend the day with them exploring the wonders of Guangzhou in the sunshine. We went round all the sights of Guangers, stopping for a beer in a bar where I met Jenny, the Chinese waitress who I played pool with and miraculously became my new wife. The highlight of the day was surely the next item on my Superlative Tour of China, that being The Tallest Tower in the World. The Canton Tower is 1968ft (600m) and was officially opened for the Guangzhou Asian Games 2010 and at the same time took the title away from the CN Tower which held it since 1976. The Canton tower won't be the tallest for long as the Tokyo Sky Tree is due to be completed in December and will top the ranks at 2080ft (634m). The superlative nature of China seems to be merely a showcase of how mighty and powerful the People's Republic of China is. It still makes me feel angry when I see the communist party spending so much money on building ridiculous towers that have no real meaningful purpose when most of their country is still extremely poor. Named after the city's previous name, the tower twists its way into the sky high above the riverbank of Guangzhou, in the daytime the sun bounces off the steel like colour and at night changeable lights makes sure nobody forgets the structure. The five of us visited the tower that evening and decided to ascend the newly named 'Sexual Tower', however, it was extremely expensive to get to the top of the tower and so we decided to just go two thirds up which was still a hell of a long way up. The view over Guangzhou reminded me of being in an aircraft on its final approach to land and seeing small lights on cars travelling silently around in the darkness. We finished the night off with a few drinks in the park near the other's hostel. The following day, Matt and I moved across the river to Guangzhou Youth Hostel on Shamian Island. Shamian Island is just like stepping back into Europe as it was formally divided between the French and United Kingdom by the Qing Dynasty and the leafy streets are flanked by colonial architecture made it feel like strolling through Barcelona. Moving to the island was a relief I hadn't felt since Hong Kong as the streets were quiet and clean, with parks and restaurants to chill out in. Despite being over the other side of the river, we decided that we should go back to our previous hostel to grab some beers and play some pool. However, instead of playing pool that evening in February 2011 saw the First Annual Sugarcane Games take place on the southern bank of the Pearl River. The first teams to take the challenge were United Kingdom and The United States of America. It was a historic moment, a moment that none of us will forget as some may have bruises, some broken bones and others incredibly dizziness.
Next time, Guangzhou Part Two, The Tallest One in the World
Posted by Andy Adam at 12:23