One week until Oktoberfest!

Next weekend the 177th opening ceremony of Munich's Oktoberfest, the largest annual festival in the world and is attended by more than 6 million people from all corners of the globe and I am lucky enough to be one of those lucky millions to go!  I am going with Luke, Mike, Kev, Matt and Mark for Mark's stag do.  We're going with a company called Festival Adventures who organise trips to the biggest festivals across Europe at a very reasonable price.  We are going to go on the 6 day trip from London to Munich, which includes travel, camp site, excursions and a guided tour around Munich.  I'm very excited about going to Oktoberfest to take part in this most prestigious festival and  and be served some great beer by Bavarian ladies with incredibly strong arms!

History of the Festival 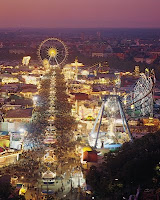 This year's festival is the 177th Oktoberfest and the 200th anniversary of the first Oktoberfest which was held on October 12th 1810.  The Bavarian festival marks the wedding of Crown Prince Ludwig the first to Princess Therese of Saxony. The Bavarians celebrated for five days, on a meadow outside the city gates, later naming the area Theresienwiese (meadow of Therese), after the young Queen. The festival has developed over the years, but remains at the same ground and stands as a lasting tribute to the young lovers and the Bavarian way of life and celebration.
Nearly two-hundred years on, significant developments have seen Oktoberfest emerge from a local tradition to a global festival event.

1835 –The ‘Rifleman’s’ parade takes place on the first Sunday of the festival
1850 – The large statue that overlooks the festival grounds is erected. The monument is a personification of Bavaria in the form of a woman.
1871 – The popular Marzenbier is first served.
1918 – Anton Gruber received the first licence to sell beer and food.

Although known worldwide as ‘Oktoberfest’, the beer festival confusingly takes place in September. The early start was introduced in order to make the most of the better weather in September. Oktoberfest has been held every year since its inception, excluding the First and Second World Wars. The festival runs for 16 days and normally ends on the first Sunday in October, and can start as early as 16th September or as late as 22nd September.

The Stars of the Festival...  Beer and Food

The six prominent breweries in Munich operate the 14 main beer-halls within the festival grounds. The smallest tent seats just 1000 people, and the largest over ten thousand.
219,443 pairs of sausages, 88 roasted oxen, and 459,279 roast chickens were consumed at one recent festival – and that’s not to mention the pork knuckles and pretzels.
The service of beer is forbidden until the festival is officially opened by the Mayor of Munich on the first Saturday of the event. The Mayor taps the first keg at midday and proclaims “It’s tapped” or “O’zapft is” for the locals.

Although this is not technically part of Andy's Epic Voyage, I feel it's a warm up to the main adventure which will get me in the right frame of mind...  I also need to put my drinking boots back on as Russia's going to be a big test on my alcohol tolerance!!