“Can we pay please?” We asked for the third time. Having to ask to pay the bill has become a strange concept for me as in Cambodia and Vietnam, they can't wait to take the money from your hands. In Laos, however, it seems that you have to ask several times and plead with them to take your money off you. We were just having a bite to eat before getting back on the boat to the mainland to board our bus to Pakse and we had five minutes to pay up, grab our bags and head to the beach.

Back on the bus again, our first major bus journey in Laos was an utter pleasure. Bags were passed up to the driver on the roof and covered with tarpaulin and each person was allocated with their very own seat. Tom, Nicky and I were on the back seat along with another girl who was not shy at falling asleep on Tom's shoulder. The windows were wide open, blowing cool air through the bus. It was a short, painless bus journey and we arrived in Pakse and hour or so later.

We didn't know much about Laos before we arrived apart from the country was extremely poor following the civil war which brought the communist party into power. Having been dragged into the Vietnam war, the USA dropped more bombs on Laos to stop the North Vietnamese between 1964 and 1973 than the entire second world war. It was estimated that Laos received an average of one B-52 bombload every eight minutes 24 hours a day. This had, of course, a dramatic effect on Laos not only the initial loss of life but the unexploded ordinances left behind.

After getting directions to our guest house from a local travel agent, we strolled and checked into the Sabaidy 2 Guest house. We dumped checked in, dumped our bags and headed to the café across the road for a fruit shake and something to eat. Whilst ordering our food, the slightly elderly lady, presumably the grandmother of the family was flicking through the television channels and stopped on something that caught her eye. It was the beginning of Prince William and Kate Middleton's wedding ceremony. When people ask me where was I when I saw our future King get married, I will think back to seating in this local café eating chicken fried rice and drinking down a banana fruit shake. Seeing London on the TV and all those patriotic people lining the streets with flags and banners in their hands made me feel proud of my nation and happy to see that there are still people that take pride in our heritage. In a small way, it made me feel homesick for a brief second.

Pakse is a small city, not touristy in the slightest with quiet dusty streets which periodically become busy with the odd vehicle. I liked it as these smaller and less visited places give you a better example of what the country is all about. On our initial list of places to visit were Four Thousand Islands, Vang Vieng and Luang Probang. Only by travelling did our plans fill out as people recommend places and maps lead the way to interesting places. As I had already been to Vietnam's My Son and Cambodia's Angkor Wat, it was time to see what Laos had to offer in the way of ancient ruins. Pakse was the place to be as nearby were the ancient Khmer ruins of Wat Phu Champasak.

The previous day, we had made the journey to the bus station where there are a series of local songthaews congregated to take people to a number of locations. A songthaew is a converted pickup truck with three benches for passengers to squeeze onto. We wanted to ask how we get to Wat Phu and how much it will cost. The tuk-tuk driver who took us from the centre of town to the station knew who to take us to. A few men stood around us and answered all our questions without us even getting of the tuk-tuk. We were told that we needed to come back the next morning when we could catch a Songthaew to Champasak for a nominal fee. Back at the guest house, it was time to relax for the night and for a proper shower with warm water instead of the river water coming from a hose pipe on Don Det.

The next morning, as agreed, our tuk tuk driver who took us to the bus station yesterday was there at 8.30 ready to take us to our Songthaew for Wat Phu Champasak. Once we were at the station it turned out we had to wait for hour until it departed. We were asked to board the songthaew by the same group of men we spoke to the previous day. It was actually quite pleasant sitting there watching the Lao people stroll around in their day to day lives. Everyone seemed so calm and content walking from bus to bus and selling their goods. The songthaew quickly filled up with locals and their newly bought goods. The time waited went quickly and before we knew it, we were on our way to Champasak. 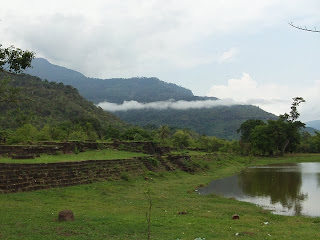 The journey took us south along the Mekong for around an hour, stopping at various places to drop people or goods off before arriving at the entrance to Wat Phu Campasak. We were the last people on board and the driver got out to take our money. “What time is the last bus back to Pakse?” We enquired.
“No public bus until tomorrow morning.” He responded.
“But you said you could take us back?!” We challenged.
“Yes but you have to pay more as there will only be three of you.” He returned.
Basically they failed to mention that the return journey would be a private affair and that it would obviously cost more. This outraged us but we agreed that we would take our chances and try to find a lift back to Pakse when we want to leave. It was a risk, we could have been stuck in the tiny town of Champasak all night with nowhere to stay. 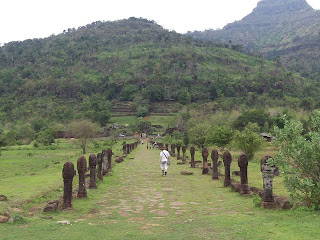 Wat Phu as we know it today was built during the eleventh century, however, there are transcripts mentioning a previous complex there in the fifth and sixth centuries, although these have long disappeared. The complex is of Khmer architecture and Hindu religion. Our first stop was an interesting museum with a collection of archaeological discoveries on the site and surrounding area. As well as the obvious size difference between Angkor Wat and Wat Phu, the sheer variance in tourist population was a fantastic relief. A handful of people were walking with us as we made our way up the long grassy path between the North and South Palaces which were under restoration work and led to the steps that climb the foothills up to the sanctuary.

Halfway up I was struck with a sudden urge to release my bowels. Great, what a fantastically inappropriate time for my insides to reject something I may have eaten. There were no toilets about. Tom and Nicky suggested that I went in the bushes. I initially thought that was a great idea, however, as I began walking into the high grass, I suddenly became aware of snakes, spiders, leeches and all those lovely creatures crawling around minding their own business. On top of that, it wasn't the most secluded affair as I looked around, I could be seen from most places above, below and on the same elevation that I was on. I eventually decided that I was going to quickly run down the steps to the toilets at the bottom of the hill. Annoying as I had already made it up three quarters of them but needs must. I won't go to much into detail but, it was a failed visit and after climbing the steps once again, rejoining Nicky and Tom and completing the remainder I discovered that the Laos people had very courteously placed a toilet for tourist convenience and the top! Running down and back up was a complete waste of my time and only agonised the issue.

The sanctuary at the top was stunning, not Angkor Wat stunning but it felt much more real in a way as it was largely untouched and was teeming with 21st century structural supports making it semi safe for people to visit. The view from the top overlooked the flat plains of Champasak and had a very calming feel which made you understand why they had built a sanctuary there in the first place.

We reached the bottom of the rather uneven and crumbling steps safely. It was time to find a ride back to Pakse. Having failed to get a tuk tuk or songthaew, we approached a line of minibuses obviously privately rented and asked whether we could get a lift back to Pakse. The first said no flat out but the second, with some persuasion, agreed to take us back to Pakse. He told us that he had two passengers and would have to talk to them first but guaranteed us it would be OK. We arranged for him to pick us up from a restaurant outside of the site in half an hour which would give us some time for some food. True to his word, he turned up to pick us up and we met his two passengers, an eccentric middle aged American couple who were only too happy to give us a ride back to Pakse. What a great couple of people, their stories of past travels were extremely entertaining and we stopped along the way to meet some locals harvesting in a slightly strange machine. Turned out to be an amazing ride back to Pakse in a luxurious air condition minivan. 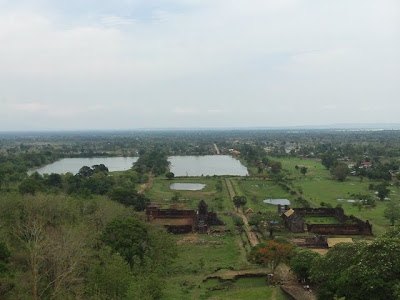 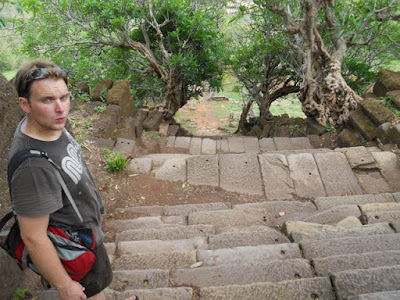 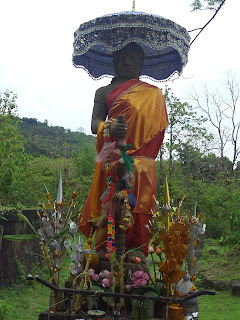 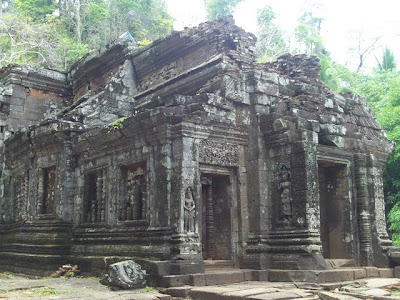 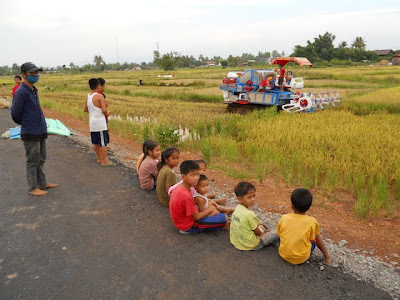