Later that evening I visited V Café to celebrate my day with a nice meal and a drink whilst listening to live music. The cosy restaurant that can only sit at best twenty people was just a few doors from my hotel and I had heard good reviews about it from the internet and lonely planet. As I was sitting there an Australian man sat down at his piano whilst his partner, a Singaporean lady, grabbed her microphone and began to entertain the five of us currently in the restaurant with smooth sounding jazz. I spent quite a bit in that restaurant as I had a main, desert and a few beers which I don't usually have but the waiters were very attentive and made me feel at home so I sat there catching up on my blog, listening to great music and enjoying great food and drink. Highly recommend the restaurant if you're in the area! I finished the evening off by taking a stroll through the streets of Dalat which fill with market tradesman at night time as the central roads are closed off to traffic. I really enjoyed the feeling of the city as it was so chilled out yet bursting with life.
The next day came around and I decided to hire the bike again to visit a few more places dotted around the area. Firstly, I wanted to take the cable car which was supposed to reach a beautiful lake at the end of it. So I followed the directions I had set out for myself in my head and eventually found the start of the cable car and bought my return ticket. There was hardly anyone using the cable car, so there was no queue and I got straight in and got on my way across the valley towards the said lake. The view of the valley and Dalat below was fantastic and the journey took around twenty minutes to complete. I disembarked and made my way through the standard tourist trap toward the exit. Once I reached the exit, however, I suddenly realised that I had been there before, the day before in fact, it was the entrance to the temple and to the lake that I had visited. Although I was disappointed, I couldn't help but laugh at my ignorance. I didn't bother walking through the temple to the lake again and instead stopped for a quick bite to eat at a restaurant by the cable car station which turned out to be a pot noodle in disguise and got back on the cable car for the return journey. 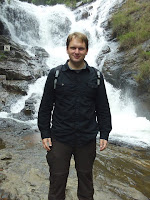