Guilin, A city of disappointments and great views

The weather was abysmal, a light drizzle was steadily oozing from the dark grey sky overhead as our car made its way towards The Lonjii Rice Terraces. Although the rain was falling, our optimism was still strong in the belief that the clouds will part and we would be able to see the promised breathtaking view from the top of the mountain. Matt and I were joined by two other people on our journey, Gabriella, an American working for China Daily in Beijing and Will, an old friend who I did not think I'd see again after randomly bumping into him in Wuhan and was very surprised when I saw him sitting in the bar/building site of the hostel with his trademark Swedish hat on. Before we got to the rice terraces, we had a planned stop at an ethnic village inhabited by the Yao people and were thrust into an unexpected tourist trap. Entering the village via a rope bridge, Matt's love for Indiana Jones once again breached the surface with a barrage of quotes as we acted with compulsion and coerced the bridge into swaying by jumping around. Our guide had told us that the show which was on offer in the town was actually another 50 Yuan, which was a surprise as I thought it was included in the price. The four of us decided that we were not prepared to pay the extra which upset the guide who told us that his boss and the village people wouldn't be happy us not going to see it. As we walked through the deserted paths through the village amongst the chickens, the guide was relentlessly trying to change our minds saying that perhaps they would give us a discounted rate which obviously meant that he would just take a smaller cut from the ticket sales.
We soon rejoined our driver and got back on the road. There was still no sign of sunlight through the thick clouds that were getting closer and closer above us as we ascended up the mountain. It wasn't long before visibility became a severe issue as we couldn't see anything out of the windows, it was as if someone had spray painted the windows in a light grey shade. The driver edged forward in his seat, struggling to see ahead and the side of the road which was accompanied by a drop of several hundred feet. He flicked the headlights on but made it worse as the light bounced off the mist and reflected back into the car and all the time the guide sitting next to him was reassuring us that he had driven for many years and was a very good driver. Unfortunately it failed to reassure me as I had never seen a good driver throughout my previous month in China. To our relief, it only took a few moments for the mist to part slightly, at least enough for the driver to see a few more feet and ease our pent up anxiousness. 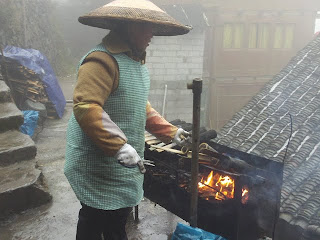 Around two hours after leaving Guilin, we arrived at the end of the road and the beginning of the final climb to the scenic area above the Lonjii Rice Terraces. Our hopes for the clouds to clear were fading more rapidly as time went on but nevertheless we got out of the car and followed our guide through the valley of tourist shops selling the usual tack up the wet and muddy slope towards the village. The path was deserted and there were no other tourist on the climb up. The village on top of the mountain was the conventional working village turned tourist trap selling souvenirs amongst the hotels and restaurants. We stopped in a restaurant for lunch on the way up, of course arranged by the guide but not included in the price of the trip which meant he got another cut from the overpriced food and drink being sold. I personally do not like being ripped off for food just because I'm a foreigner. It reminds me of a local restaurant Karin, June and I went to by the Terracotta Warriors where we were presented a menu that had Mandarin on the left and English on the right, the pages were formatted exactly the same but had one major difference... the price. We alerted the waiter to this inconsistency and he tried to convince us that they were completely different dishes. We certainly not convinced and not hungry enough to give in, so we snapped the menus shut, said thank you and walked out. This was different though, this restaurant sold dishes that were special to that area, Lonjii bamboo rice with fresh fish. The rice is crammed inside bamboo and placed into the fire and served still inside the bamboo. It was absolutely delicious and by far the best rice I have ever eaten in my life. Matt and Gabriella had a couple of other dishes to calm their hunger pangs which they generously offered a taste of, and they were also amazing.
After lunch and an obligatory quarrel over the inconsistencies of Asian bills, we headed on further up through the village. The climb was on steep slippery steps and the drizzle continued to fall. As we got out from the village buildings and into the tree lined paths, I was immediately shocked by the huge icicles hanging from the trees like frozen daggers, the likes of which I hadn't seen since that day on Lake Baikal with Christian. We soon reached the pinnacle of the mountain and all of our hopes for a clear sky evaporated into the clouds making them even thicker. It was such a disappointment but something we silently expected ever since leaving the confines of the hostel. The guide was extremely helpful as he held a photo of the terraces in front of our eyes and taunted us, basically saying “Lets have a look at what you could have seen!”. There was absolutely no reason for us to stay up amid the mist for long as we couldn't see anything, so we headed back down through the village. Fortunately there were smaller terraces in the village that you could see so we didn't go away with nothing and at certain points if you looked through your peripheral vision you could make out the shadows of the main terrace seeping through the clouds.
As our guide and driver didn't make any commission through the ethnic show, they decided to take us to silk factory on the way back to Guilin. We entered the building and suddenly everybody sprung into life, lights were being turned on and the performance got underway. It was quite interesting as I had never seen silk being farmed and processed. Going to things like this is of course an elaborate tourist trap but completely fine if you remain firm and adamant that you are not going to buy anything despite the hard selling. Trying to sell travellers quilts, duvets and pillow cases seems a bit of a waste of time to me but we walked through the process and looked at their goods returning empty handed to the yet again disappointed guide. As we dropped Gabriella off at her hostel, I was shocked that she gave the guide a tip. Matt, Will and I were personally disappointed with the tour and annoyed that they go despite the weather being bad instead of cancelling and rearranging for another day meaning that we were unanimous in the decision not to tip. Once we arrived back at our hostel Matt unsurprisingly urgently needed the toilet but I foiled his trademark attempt at dodging difficult situations including money. He had done this in Oktoberfest when he got a lady to take a photo of us and when she returned with a printed copy, he quickly disappeared off to the toilet. Fool me once, shame on me, fool me twice, shame on you Matt!!
The Wada Hostel was at that point in the midst of a severe renovation and was a complete building site. The weather was cold and we all huddled around the two fires which emitted the only warmth in the bar. The girls running the place were fun however and we helped them relocate their pool table back inside the bar one evening and the games begun in earnest. I met a group of English travellers who told me they were cast in a film called Robotropolis in Singapore and tried their hardest to ruin continuity by shaving their heads on the second day of shooting and moving things around the set. Sounds like an extremely rubbish film but may be funny to watch when it comes out. The rooms in the hostel were freezing cold but we were relieved and comforted by the electric blankets which held us hostage to the beds making it extremely hard to get out of bed in the morning. 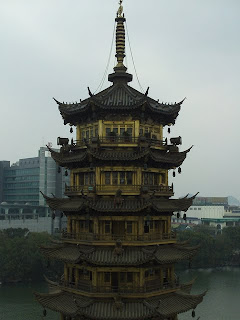 On our second day in Guilin we visited the next superlative item on a tour of China and that was the magnificence of the tallest copper pagoda in the world. It was actually very unremarkable and China's need for superiority make me laugh as the always need to make some the 'est in the world, e.g. the tallest 'copper' pagoda 'in the middle of a lake' 'in a city called Guilin' in the world. After our visit to this engineering 'masterpiece', we headed for Seven Stars Park which, among other reasons, is an excellent scenic platform to observe Guilin's truly spectacular unique karst landscape. We exited the park and headed back to the hostel as Will was leaving on a train that evening to his next destination before going to India. On our way back we stopped by an Irish bar for a farewell drink.
Next time, Yangshuo, Sunshine and Bicycles.
Posted by Andy Adam at 16:41