The Forbidden City (also known as the Imperial Palace) is the heart of China's imperial past and was home to the Emperors and Empresses from the Ming and Qing Dynasties. Construction started on the palace in 1406 and finally became inhabitable for the Ming emperor in 1420. The English colloquial name 'The Forbidden City' is a translation of the Chinese Zijin Cheng which means 'Purple Forbidden City'. Purple referring to the stars and Forbidden City meaning that it was forbidden to enter or leave the palace without the emperors authority. The Emperors themselves did not leave the city unless they really had to.
Puyi, the last Emperor of China, did not leave the Forbidden City until he was evicted by war lord Feng Yuxian in 1924. As I discussed in a previous post, he was crowned Emperor in 1908 when he was a mere two years old until the Republican revolution of 1911 which resulted in the abdication of five year old Puyi. The Xinhai Revolution was a result of a general feeling of resentment amongst the Chinese Han population to the corruption within the Qing government and how it favoured Manchu ethnicity over theirs. Having taken control of the country, many revolutionaries were in favour of a constitutional monarchy similar to the United Kingdom, where the Royal Family remains in place but the political focus is handed over to a democratic government. Therefore, under the agreement Empress Dowager Longyu signed on behalf of the Emperor which brought the Chinese imperialism to an end, Puyi was allowed to remain in the Forbidden City as monarch but had no political power.
Puyi remained within the walled confines of the palace but I'm sure Puyi was too young to understand his importance in China and what was happening with the revolution. Under the abdication agreement he was allowed to retain all current staffing levels and his Eunuchs, although no new Eunuchs were allowed. The year of 1917 saw a extremely brief revolt by warlord Zhang Xun who remained loyal to the Qing Emperor and he returned Puyi to the throne for twelve days. During this extremely brief period of restored imperialism a republican aircraft deployed a bomb over the Forbidden City which caused very minor damage but is believed to be the first aerial bombing in East Asia.
In 1924 another warlord took control and evicted Puyi and his family from the palace and of Beijing. Puyi lived in the Japanese embassy until he was relocated to the Japanese quarter of Tiajin. A few years passed and his desire to be restored to the throne and resurrect the Qing Dynasty grew, he wrote the the Japanese Minister of War and stated his wishes. In 1932 the Japanese began to grant his wish and made him ruler of Manchukuo and two years later he was crowned as the emperor.
Although he had the title of emperor, he had no real powers and acted as a puppet to Imperial Japan who maliciously and vindictively made him sign new laws and attend ceremonial occasions. The Japanese were constantly increasing their influence in Manchuria and were trying their hardest to destroy all Chinese culture and society from the area. This must have been hard for Puyi as his family were Manchurian. In August 1945 and at the end of World War Two, Puyi was on an aircraft fleeing from the approaching Soviet Red Army but was caught before they had a chance to take off and imprisoned in Chita, Siberia.
China is full of hawkers selling their wares and I thought that maybe the Forbidden City would be a sanctuary where you could escape the constant bombardment of “What do you want?” and “Buy this!” but I was wrong the whole outer court is completely full of these annoyances. However, once you are inside the inner court, things become calmer and the peacefulness of the Forbidden City materialises. As mentioned before, the astonishing large area of the Forbidden City was built on a North-South axis and it's major buildings and gates are positioned on this with passageways winding their way around the different temples and buildings used by the Emperor's and their staff. In 2007 a Starbucks opened up inside the centre of the Forbidden City which is strange for a 'communist' country to have a global capitalist giant in the very heart of their country's history. It created outrage amongst the people of China and so it closed within a year.

Although the history of the city and what it stands for is impressive and intriguing, I'm not sure if I was completely blown away by it's architecture. The series of grand halls are beautiful but they quickly become 'same, same'. My favourite part of the whole city was the Imperial Garden at the North most part of the complex. It's leafy trees and strange rock formations give it a lovely calming feel and so I spent a while sitting there reading up on the Forbidden City and planning on what to do after I left the confines of the peaceful place. 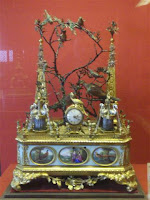 I finished off my trip to the Forbidden City with a trip to the clock exhibition which is an amazing collection of clocks from around the world. I was lucky enough to get there in time for the afternoon show when chosen clocks are triggered and you watch the incomprehensible mechanisms within the clock put of a highly entertaining performance of moving objects with musical accompaniment. When I first read the guide book about this showing I thought it was going to be lots of clocks going off creating a symphony of chimes and movements but disappointingly it was only three of them. The exhibition is highly recommended though and was a highlight to my trip to the Palace.
Jingshan Park
I left the city through the Northern gate and headed up the hill in Jingshan Park which gives you an excellent overview of the Forbidden City and beyond. On my way up the hill I had my first photo shoot in China. A Chinese gentleman came up to me and pointed to his camera and then to me followed by his wife, which I took for him wanting to take a photo of me and his wife. I of course love being the centre of attention and agreed, so he took the photo and then passed the camera to his wife for a photo of me and him. Whilst posing with the Chinese classic 'two-fingers up for peace sign', he said to me that I was very tall, which completely shocked me for two different reasons. A. I've never been described as tall in my life because I am not and B. He was clearly half an inch taller than me anyway! I continued wearily up the hill to the top where a pavilion sat on the peak with a golden Buddha residing within the walls. The winter sun was low and the light was bouncing off the red roof tops of the Forbidden City and I thought this was more beautiful than being inside the city's walls.
The park used to be a part of the Imperial Gardens until it was handed over for public use. The hill, popularly known as Feng Shui Hill, was artificial and was created by the earth excavated from the moat surrounding the Forbidden City and nearby canals. China has a long history of abiding to the laws of Feng Shui and the Forbidden City and Jingshan Park is of no exception. Both are sitting on the main central North-South axis of Beijing and The hill was created as Feng Shui dictates that it is preferable to build a property South of a hill, which did not exist when the capital was moved to Beijing. The hill is comprised of five peaks which represents the compass points in which the city was built. The last Emperor of the Ming Dynasty hung himself up here in 1644 whilst looking over his empire.
After sitting on the top of the hill taking in the serene surroundings, I decided that I should push on and explore the park further so I descended down the North face of the hill. I reached the bottom and the grassy park surrounded by green trees was buzzing with a social atmosphere that Chapelfield Gardens doesn't have. There were many elderly people there talking, story telling, playing chess, singing, dancing and playing Jianzi (kicking a shuttle-cock type thing about). The calming and pleasing atmosphere was overwhelming and it showed me that the Chinese people have a much better social atmosphere than we do.

I returned to the hostel via the food street where I saw some strange foods like snake, cockroach, scorpion and general bugs of all shapes and sizes. I wasn't sure whether this was just something for the tourists or if they really do like that kind of thing. It makes me wonder who first thought about eating a bug, 'oh look, there's a unknown bug there flattened on the floor, I'm going to put it on a skewer and munch away.'. Walking down through the busy street I became aware of the skewers and felt a sense of fear as they could easily poke your eye out!  I passed the bugs and settled for some bananas in tofu balls which were nice although I'm sure I got overcharged and when I queried this with the lady she became aggressive and shouted “15! 15!! 15!!!” I paid and made my way back to Tienanmen Square to catch the flag ceremony where I stood amongst countless number of Chinese tourists all wielding a camera or two in their hands, snapping away as the soldiers appeared from within the Forbidden City. The soldiers cross the road in full ceremony, paraded around the flag pole with their rifles and stood there still as the flag is lowered and removed before heading back across the road into the Forbidden City.
Once I was back at the hostel, I was greeted with a surprise. Yves, the Luxembourgian, I had met in Yekaterinburg was there and we spent the evening catching up with what we had done. He had gone through Kazakhstan and entered China on the Western border near Urumqi.
I think I've prattled on a bit too much in this blog about history, but I found it interesting so thought I should share it.
Next time I promise to speed things up and tell you about The Great Wall of China on Christmas Eve, my music lesson on Christmas Day and getting severely drunk!
Posted by Andy Adam at 09:37