The best way to describe Oktoberfest is 'Heaven on Earth' and that is an understatement.  What more can a man ask for other than beer, meat and very lovely ladies.  It's very hard to describe the world's biggest beer festival, it's just so good.  The atmosphere is second to none.  Everyone is out there having an absolutely amazing time, enjoying the beer, music and meat.  I would implore everyone to go at least once in their lives.  Oh the chicken, how good was the chicken!?!  It was the best piece of succulent chicken I have ever had.

The festival ground itself is massive.  You can't believe they take it all down after the festival and put it up again next year. 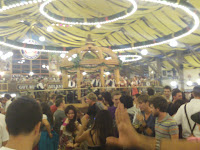 Our trip there was long and was not helped by a Kiwi who was not relenting to shout Pingu every 10 seconds when people were trying to get some sleep, however the 20 hour bus journey was definitely worth it.  We camped around 10 minutes outside of Munich and there were bus shuttles going to and from the grounds all day.  The campsite itself was just a sea of tents with thousands of Kiwis and Aussies, beer was served all day either from the shop or the beer dispensing machine.  Which meant the grounds turned into another smaller festival at night.  I honestly don't think we ever went 10 minutes without a beer in our hands!

On one of the days we went for a bit of respite from the festival and visited Dachau concentration camp and Andechs monastery.   Dachau was the first concentration camp to be built by the Nazis when they got into power.  It was home to hundreds of political prisoners who the Nazis believe were against their cause.  The camp was a sobering experience for everyone and it is important to remember what happened during the reign of the Third Reich.  It's very concerning that the circumstances that brought about the rise of Nazism is reflective of what is happening today, for instance, high unemployment, high immigration, a country in recession.  This is why parties like the British National Party concern me.  The displays at Dachau inform you how Hitler was initially ridiculed and imprisoned for his attempt to forcefully gain power and then how support for him grew rapidly after his release and release of his book Mien Kampf.  It astonished me how a country such as the Weimar Republic could change so radically and so quickly into Nazi Germany. 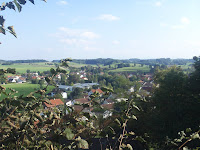 Andechs Monastery was a wonderful place to visit and drink.  Sitting on the top of a hill looking out on the rolling Bavarian landscape, it's brewery has been brewing beer since the 15th century and I can confidently say it was beautiful. They offer three varieties of beer, Dunkel (dark), Weiss (Wheat), and Helles (Light).  Of course we tried all three once and then the Helles and Dunkel again to conclude which beer was the best.  My favourite was the Dunkel by far. 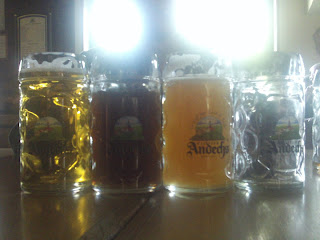 Andechs was certainly worth a visit and was a highlight to the trip.  That night I discovered my limit to beer consumption.  I did not feel unwell but I literally couldn't consume anymore, my stomach was full of the beautiful stuff.  It's true what they say, this beer does not give you a hangover.  The main reason for this is Reinheitsgebot or 'Purity Order', which restricts breweries to use only the main ingredients of hops, yeast, barley and water.  This makes the beer absolutely incredible and easy to drink.  Since being back, I clearly taste the difference Bavarian beer and British larger, the British larger is full of the nasty stuff like preservatives which gives you the hangover.

Our last day was spent going on the fairground rides and having our last drinks.  On the first night Mark, Duncan and I went on the most amazing ride whilst drunk... A-MAZ_ING.  Walking into a beer tent and ordering our first drink of the day, watching the ladies go by and listening to the band, we were completely unaware of what we had walked into...  We were politely informed by a merchandise salesman that in that tent, on that day, it's gay day.  Our eyes were opened and the filter which makes our brains only recognise females was lifted and it was so obvious!!

We left there after we finished our beer and went on a revolving bar to enjoy a weiss beer whilst watching the world going round and then returned to the Lowenbrau tent where we started to gobble down our last taste of heaven before our return to England.

What a fantastic place and a brilliant experience.  Words cannot do justice to how good it is, so I'm not going to bother to write anymore....